Originally announced for Xbox Live Arcade, Twisted Pixel’s Kinect-only title The Gunstringer will now be sold as a full retail title this fall. With the extra time, the developer says it will be working to polish the game, while adding some new content to flesh out the experience.

While the core mechanics of The Gunstringer involve moving the puppet protagonist with your left hand and firing with the right, Twisted Pixel is showing off some platforming — and sex with an alligator — at E3. 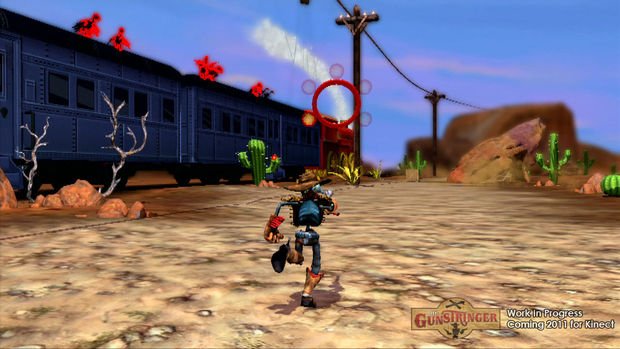 The side-scrolling section I played had a Donkey Kong vibe, with The Gungstringer moving up a series of wooden ramps, as barrels rolled down in his direction. To dodge them, it was simply a matter of quickly lifting your left hand to make the puppet jump.

In another, I ran towards the screen (“on rails”), and I moved the puppet left and right to dodge spiked vines and rocks. Behind me the whole time were rolling logs nipping at my feet; there were a few instances where I had to hop obstacles, as well, again by lifting my hand to jump.

While The Gunstringer’s main mode of attack will be aiming and shooting his revolver, he’s also pretty handy with his fists. In the final section I tried, I swung my fists forward to make the puppet smash through enemies that stood in his way. Closing the section, The Gunstringer hopped on an enemy — and with me swinging both fists — and pummeled his face. 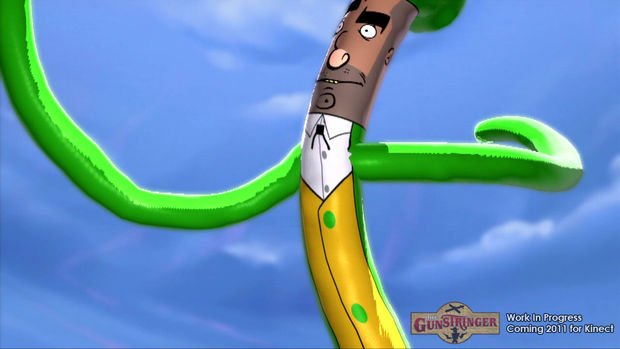 Mixing up the gameplay we had already seen (the shooting, which can read more about in our earlier preview) with these sections should go along way in keeping The Gunstringer experience feeling fresh.

Another way will be Twisted Pixel’s trademark off-beat sense of humor. During one flashback sequence, we learn the genesis of one enemy known as The Gatorjack: a lumberjack had sex with an alligator to bring this creature to life, of course. So if you’re eying the ESRB description and wondering why it says “sexual themes,” it’s because players will see a puppet lumberjack humping a puppet gator.

Look for The Gunstringer on retail shelves this fall.