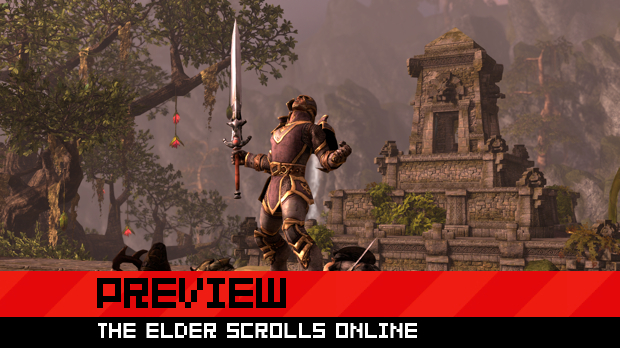 You’ll never have to ask yourself how great the Elder Scrolls games would be as an MMO again. Elder Scrolls Online is here to fulfill all of those fantasies as well as ones you never knew you had. We got a really early look at the title and would like to share what we know. Just be warned that they’re sitting on more than they’re telling us. Consider this a glimpse; I think it will be some time before we get a full picture.

After 20 years of offline adventures, Elder Scrolls is going online. But, in keeping with the spirit of the series, you’ll be able to play the way you’d like, which means you’re free to do whatever, whenever. Solo adventuring, PVP fighting, guild activities — everything you’d expect in an Elder Scrolls standalone game is here, but this time you’ll get to experience it all with your friends. 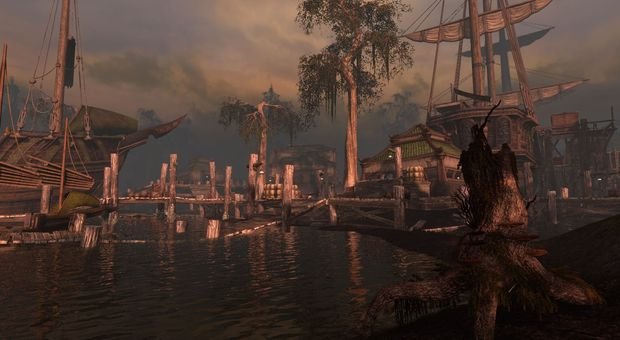 Elder Scrolls Online does have a story with a marked beginning and end, but you can move through it at your own pace, and in your own style. You’ll be able to play with others at any time, but the story instances of this game are solo play only, meaning that you will never play with anyone else in your own story missions. In the beginning you learn that your soul has been stolen, and through the game you’ll work to retrieve it. You’ll travel the world to get it back, exploring the lands of Tamriel back 1,000 years before Skyrim.

In this time three alliances control everything: Ebonheart to the northeast, Daggerfall in the northwest, and the Aldmeri Dominion in the south. In the middle of them sits the province of Cyrodiil, which series fans will remember from Oblivion. The Imperials been overrun by the three alliances, and have been defeated so heavily that they’ve raised the undead to help them fight back. This is where PvP will take place.

A short tour of the varied locales and characters looked great. We were treated to a fly-over of ships at coast, or windmills in a field. City capitals, deserts, and dungeons were shown in the game’s engine, with the visual quality holding up nicely compared to current MMO games.

The combat in Elder Scrolls Online is based on three characteristics: health, stamina and magic. Every class can block, dodge and hold down attacks to charge a power attack. We saw some basic fighting live, and it showed real-time blocking of enemy attacks. When the player successfully blocked they were given an opportunity to perform a special attack. Also, the game’s Finesse system rewards players that do well in combat with an extra reward. Even further rewards are available for players that work together, even if they aren’t in a group. We were told that abilities that players didn’t even know they had will pop up while helping others to encourage teamwork.

In a couple of other battle examples we saw how enemy character builds could work together. Enemy spell casters would enhance another enemy’s attacks to do more damage to the player. For instance, a rogue might throw down oil, and then a fire mage would light it up. Or, after the player takes down an enemy, a necromancer could raise its skeleton to come back and attack again.

The game’s open-ended nature lets you explore freely. There’s no quest hubs to be found, meaning that you’ll just find things to do. Bethesda promises that quests are more involved than your typical killing of X number of small animals. Their goal is to offer interesting things to do that are actually related to the series’ lore. 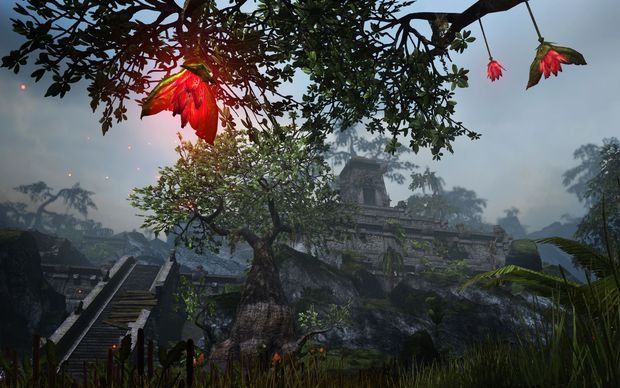 A live example of a quest followed a 10th or 11th level player in a city that had been taken over by werewolves, led by a general zombie werewolf. While exploring, a point of interest marker showed up on the game map, indicating that an interaction was available. Traveling to that point, a character with a glowing gold outline waited to offer a quest. This NPC told the player that the mages guild has been seeing spirits of battles from thousands of years ago and that they would like help in quelling those spirits. This particular POI offered 30 minutes of combat in a quest that had the player killing ghosts and finding an ancient weapon.

After completing the quest, when that weapon was returned from camp, a ghost from the past was summoned, and that ghost tried to warn the player of something happening in the present day. It turns out that the summoned ghost was able to tell the player how to take down that werewolf general. This was done by traveling through a rift in time where the player could see ancient battles through the eyes of a soldier. Through this the player learned that the general hid in a cave, and in that cave he held a NPC captive. He also learned that fire was its weakness, and was finally able to take it down and complete the quest.

Bethesda was not ready to offer much in the way of information on player-vs-player for Elder Scrolls Online. We do know that their goal is for hundreds of players in battle. With the three alliances fighting over Cyrodiil, the towns from Oblivion will serve as the strongholds that players will work to defend. We saw a demonstration video that showed huge battles at these points, where dozens of players fought, with weapons and spell flying every direction. Bethesda says that huge battles are already up and running; a recent in-studio session featured 150 players in combat at the same time. 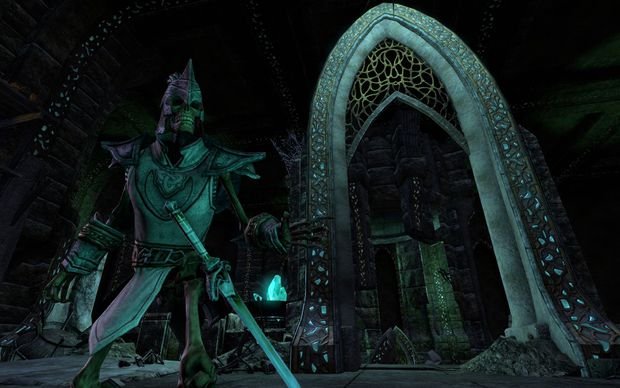 PvP in Elder Scrolls Online will range from small skirmishes around farms to large sieges. The overall strategic game has players fighting over Cyrodiil, with the eventual goal of controlling enough cities to be crowned emperor.

The game will launch on both Mac and PC, and the team has focused on making the game scalable to run on older machines. Bethesda says that that a powerful gaming rig will not be required to enjoy it.

Elder Scrolls Online pulls the lore, locations and even some mechanics from the past series games to create a huge online world that everyone can experience together. The artwork and overall scope from this early look definitely impresses. This very ambitious project is being worked on by a team of MMO veterans that have big plans and even bigger hopes, and have come up with a formula that will set ESO apart from the World of Warcrafts and EverQuests out there. Beyond that, how will series fans take to have thousands of live players running around in their beloved single-player RPG?  There are still many more questions to be answered.