A lot of you may not be interested in The Act, React Entertainment’s interactive, hand-drawn comedy that will undoubtedly draw comparisons to Dragon’s Lair. But I am currently lamenting the fact that I do not own a Mac, iPod touch, or iPhone, because I desperately want to play it when it comes out later this month.

The Act puts you in control of the affable Edgar, whose life hasn’t quite put him in the position he wants to be in. Edgar works as a window washer with his younger brother, Wally, at the city hospital. Here, Edgar encounters a nurse named Sylvia, and falls for her. The game becomes a balance of trying to help Edgar keep his job, rescue his brother, and romance the woman he’s in love with.

The only gameplay component to The Act is swiping left or right on your device (or moving a mouse left or right on a Mac). You could have a big, stupid conversation about whether or not it’s even a videogame. It’s not being presented as a game per se, but “game” is shorter than “interactive hand-drawn comedy.” The first situation I played was a Casablanca-esque dream sequence that Edgar falls into while working, in which the goal is to woo the “woman of Edgar’s dreams.”

Edgar leans on a piano nearby and you have to get Sylvia’s attention. Swiping to the right prompts Edgar to make advances that get more and more overt — and, eventually, obnoxious — while swiping left will scale back. The key to the situation was not being too obnoxious (surprise!), letting her subtly notice you, and then showing interest. 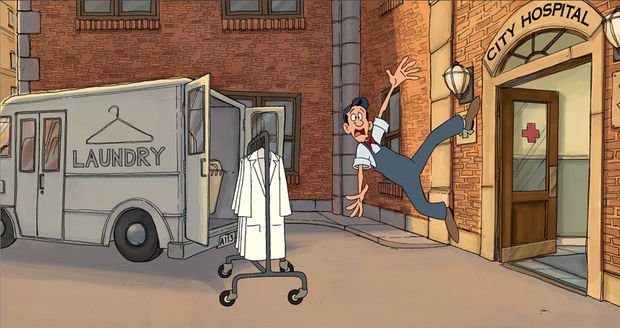 It wasn’t particularly deep, but it was fun to see the interplay between the characters, as well as some of Edgar’s more buffoonish actions if you push too far right too quickly. The visuals are incredibly smooth; the result of over 230,000 hand-drawn frames is gorgeous, classic animation and features a distinct sense of style that I’m in love with. Additionally, the music and sound effects react with what’s going on, and surprisingly, it helps get you involved. The jazzy score and lack of voiced dialogue are classy.

The second bit I played was a balancing act between persuading Edgar’s grouchy, short, bushy-haired boss back into the window of the building and trying to get his narcoleptic brother back to work so the boss wouldn’t rail him for sleeping on the job.

I’m told the gameplay does become more nuanced and challenging as the game progresses, sometimes necessitating quick flicks in either direction. Still, there isn’t any more to it than that — not even up and down. If you’ve read this far, though, you likely have accepted this and are here for the original presentation of classic style. The Act is set to clock in at one to two hours, and is being released in eight different languages at the end of this month. I will find a way to play it, somehow.