15 months and nine major patches later, Trion Worlds is looking to expand the real estate of Rift. With the addition of two new continents, Dusken and Brevane, the player space of the popular MMORPG has been tripled.

Trion Worlds said this is more of a necessity then a luxury, since it used so much of the game’s current land mass in quests attached to recent patches. Storm Legion is going to bring some quests and unique additions of its own, as well, though it may take much longer than 15 months to fill up its enormous islands. The expansion will launch with seven new dungeons, three new raids, a new Chronicle (solo player instance), dimensions, and new enemies spread across the two continents. 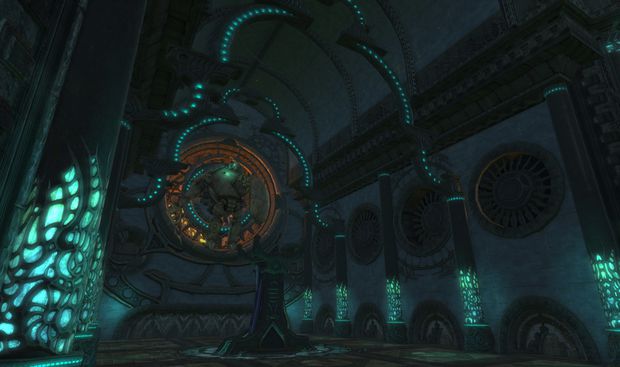 The demo took place in a new dungeon with an eye-catching Steampunk aesthetic. The walls were lined with cogs and pendulums, surrounded by elegant, detailed texture work. There is a lot of depth in these environments that make the game stand out amongst other games in the genre. This new focus on discovering lost, ancient technology is a nice twist for those who feel a bit tired of Rift‘s established world.

Another impressive addition is a new set of boss encounters with colossuses, which sound exactly like you imagine. In an effort to have more 80+ player raids outdoors, Storm Legion offers a couple instances with these towering juggernauts that are as tall as a 20-story building. These things are absolutely massive. Seeing them approach you, having their foot take up your entire screen is really something I haven’t seen in an MMORPG before. 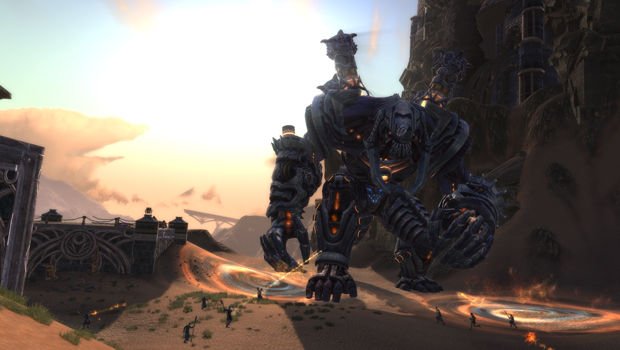 The way these battles play out are also unique to the genre. There is a lot of timing-based attacks in these fights. If you time a hit against the colossus correctly, you’ll gain speed and damage boosts. As their armor gets destroyed, more boosts fall to the ground that can be picked up for further bonuses. After dealing a couple serious blows to this beast, he takes off and smashes through a wall, unveiling a new area for players in the instance to explore.

Storm Legion seems to be doing a lot of unique things not only in the world of Rift but in the larger genre it is a part of. With ten additional levels to gain, new mounts, and a whole lot of interesting, new content, this appears to be the perfect shot in the arm for Rift‘s player base. Come and get your MMO heroin in Q4 2012