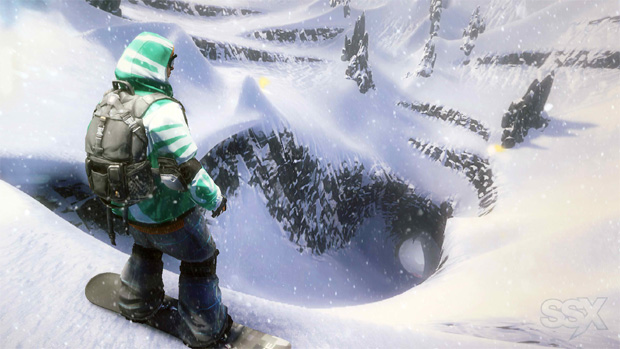 It’s been quite some time since a game worthy of the name SSX hit the market. The series had already been in a bit of a slump before the ghastly SSX Blur, a game poor enough EA didn’t even acknowledge it during their behind-closed-doors presentation as being in the current console generation despite releasing on the Wii.

No longer. The SSX I played at E3 this week is bolder and more over-the-top than ever as it transforms the mountain ranges of our world into some of the most extreme snowboarding opportunities yet.

To create the mountains of SSX, EA created a software program called Mountain Man and topographical satellite data from NASA. Using these tools, they’re capable of fully rendering the true topography of a mountain in a mere 28 seconds. That’s just the beginning, however. “We’re not using all of this NASA data to create a simulation,” says Creative Director Todd Batty. “If we wanted to make a simulation, we would have been done by now. We wanted to make Burnout on snow.”

No, the real work begins after this intial rendering as the designers carve the character of SSX into the environment, tweaking our real world to offer the exaggerated snowboarding experience the series is known for. Clearly mad with power, the level designers are pulling out all the stops with hundreds of possible routes down each mountain and the freedom to explore and tackle every slope however you want. EA impressed upon the idea that if you can see it in the environment, they want you to be able to performa  trick on it. Every bump is a ramp and every sharp edge is a grind.

With all of the possibilities, navigation of this content was a concern. Inspired by Google Earth, stage selection begins with a view of the entire globe where you choose which mountain range you want to explore. Every range on Earth is represented and from there you can select an individual mountain and drop point.

The three types of gameplay comprising SSX are casually referred to as, “Race It,” “Trick It,” and “Survive It,” and we were shown three examples to illustrate what those terms mean. The “Race It” stage, which is exactly what it sounds like, was the legendary Kilimanjaro. The designers took the famous crater at the top of the Kibo peak and did the most ridiculous thing imaginable by creating a track through it. For the “Trick It” sequence, which challenges players to perform as many massive tricks as possible, we were shown a route on Makalu in the Himilayan range, built on the Great Wall of China. Do you think there were grinds? You bet your ass there were, with long beautiful stretches to chain together some serious tricks.

The “Survive It” segment was set on Mount Denali and this gameplay mode requires a bit of explanation. When you’ve completed a set of race and trick runs on a mountain, you’ll then tackle a “Deadly Descent,” the SSX equivalent of a boss fight against the mountain itself. The goal is to make it down the mountain from top to bottom without being swallowed by it. Every snow bank and slope is assigned an impact rating, which is compared to the amount of impact created whenever you land. If your impact exceeds the rating, you’ll start a snow drift which begins to chase you. As you continue to exceed impact ratings, this drift increases and soon grows without your help as the weight and movement has its own effect on impact ratings further down the slope. It’s thrilling and difficult, so much so that the representative from EA playing the game had yet to complete it once during the course of the day’s demonstrations.

EA also showed off a few other features, including a wind suit that will enable players to glide through the air and access new areas of the environments or just be awesome. You also have a loyal chopper pilot, who not only drops you off at the top of a run and picks you up again at the end, but can also light your way, act as a guide and occasionally provide trick opportunities by allowing you to grab on to the skids and hold before dropping back down on to the mountain.

In designing the controls, the team has chosen to offer two options. Old-school button mashers like myself will feel right at home in using the four face buttons to perform tricks. If you’re more comfortable with pulling your moves with an analog stick a la Skate, that will be available as well with both schemes active at all times. I tried both and didn’t see an advantage to using one over the other, though Batty suggested that the analog would offer more fine control over your moves.

I came away incredibly impressed by what I saw of SSX and it’s still early. At three months away from alpha status, Todd Batty expressed some level of amazement that EA was willing to show the game at E3 at all, stating that they tend to hold back on releases still at the progress level of this one. I’m glad they did and I’m fairly certain they will be as well. SSX feels exuberant in the hands, is visually gorgeous and almost certainly the return to form fans have long cried out for.