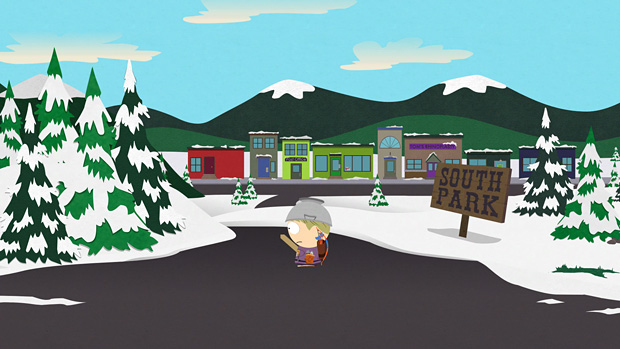 South Park games have never really been the best and, after that last one that came out earlier this year, I had zero expectations on Obsidian’s take of the hilarious show. After getting a demo of South Park: The Stick of Truth and seeing just how the game plays, I have to say it’s now become one of my highlights of E3.

The Stick of Truth marks the biggest storyline Matt Stone and Trey Parker have put into a South Park since the movie. The duo worked closely with developer Obsidian and (of course) are voicing pretty much everyone and everything.

The story revolves around the “New Kid,” who’s just moved into South Park. It’s not even five minutes into the game when the South Park humor is thrown at your face, with your parents telling you to go make some new friends so they can go break in the new bed. Try to enter your house, and New Kid’s dad pokes his head out of the upstairs bedroom window, naked, and yells at you to go explore.

After a little bit of exploring you come across Butters, and he leads you off to meet the grand Wizard, Cartman. The kids of South Park are engaged in a giant battle, and Cartman recruits you to join his side of the conflict. Once recruited, you’re able to enter your name, customize your character, and choose from either the fighter, mage, cleric or thief classes.

Before you can go on your first grand quest of fetching Cartman some kung pao chicken, Cartman’s backyard is attacked by an opposing team, and they’re after the Stick of Truth. You have to help defend the backyard, and it’s here where the game’s turned-based battle system is first shown off. The whole feel of it is very similar to the Super Mario RPG/Paper Mario series. Face buttons execute different attacks/spells, and timed button presses let you block or increase an attack. And just like any RPG, you’ll level up after a fight, and earn money, weapons, armor, items and rare loot that can be applied to strengthening your character.

You can also summon in friends that you’ve made throughout the story to battle, and in a later part of the game we see New Kid calling in Mr. Slave. His attack consists of him diving on someone’s head and forcibly shoving them into his anus. Yes, seriously. His attack is shoving someone up into his butthole. You even have to repeatedly tap A to help Mr. Slave accomplish the job!

South Park: The Stick of Truth has every bit of that South Park charm. It felt like I was just enjoying a regular episode of the show, and that demented sense of humor is ever present. I’m suddenly — unexpectedly — very excited to play the full game when it releases next year.