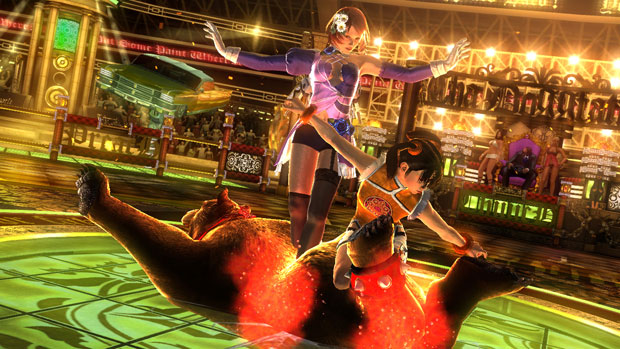 I bet that headline is a sequence of words you were never expecting to see.

At E3, didn’t-see-that-coming shockers tend to fall into the category of unlikely or unforeseen alliances, like Gabe Newell announcing Portal 2 for PlayStation 3 at Sony’s E3 2010 press conference. In that vein, ladies and gentlemen, I now give you… “Knocc ‘Em Down” by Snoop Dogg, an original track that the gangsta rap veteran recorded specifically for Namco Bandai’s Tekken Tag Tournament 2.

The upcoming fighting game will also feature a Snoop Dogg-themed bonus stage where Mr. Dogg, flanked by two fly honeys, surveys the action from a pimped-out throne. Namco Bandai touts the collaboration as an “East Meets West” merger between the “Godfather of Fighting Games and Doggfather of Hip-Hop.” If the trailer above doesn’t get your head bobbing, Namco Bandai will release a full music video within the week, in which top Tekken players and model Adrianne Curry will fight Snoop Dogg. (Presumably in the game, not a rap battle. Although we’d pay to see the latter.)

For his part, the Doggfather is quoted as having been a fan of the Tekken franchise since the ’90s, and he has this further gem to offer:

All you Tekken Tag Tournament 2 fans better get ready to experience kickin’ ass on Tha Boss Dogg’s stage with my new song “Knocc ‘Em Down” banging in the background. What more could you ask for?

Tekken Tag Tournament 2 is due out in North America on September 11, 2012, and in Europe on September 14, 2012, for Xbox 360 and PlayStation 3. Fans of fighting games and Snoop Dogg can pre-order the game to receive early access to his bonus stage. I’d love to keep quoting the surreal press release Namco Bandai sent out, but you really should just see it for yourself below, along with three screenshots. 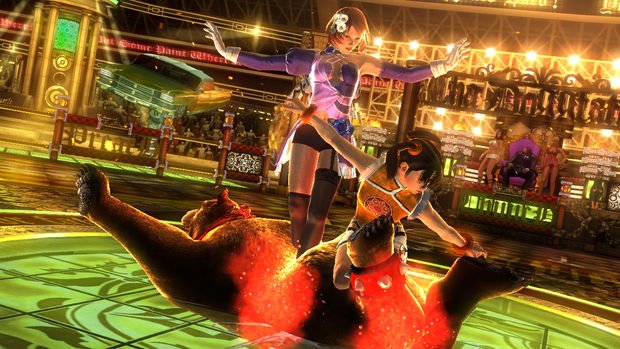 Los Angeles, Calif., (June 5, 2012) – NAMCO BANDAI Games America Inc. has joined with iconic hip-hop star Snoop Dogg to create original content for TEKKEN TAG TOURNAMENT™ 2, the next installment in the award-winning fighting game franchise coming this September for PlayStation®3 computer entertainment system and Xbox 360® video game and entertainment system from Microsoft. Snoop Dogg puts his inimitable gangster touch on TEKKEN TAG TOURNAMENT™ 2 with an original song created exclusively for the game, titled Knocc ’Em Down. The Doggfather will also make a special appearance in the game as a non-playable character in The Snoop Dogg Stage as a special pre-order bonus to be made available in addition to previously announced pre-order DLC that bolsters the largest roster in TEKKEN history.

“We are big fans of Snoop Dogg and are proud to welcome him to the TEKKEN franchise,” said Katsuhiro Harada, TEKKEN Project Director at NAMCO BANDAI Games Inc. “The content we created with Snoop Dogg and the song he made for the game allow TEKKEN fans to experience the legendary hip-hop star in a unique way and blend both Eastern and Western cultures like never before.”

“I’ve been a fan of TEKKEN since the 90’s so I’m excited to have made KNOCC ’EM DOWN for the game’s soundtrack. The game’s got a special stage featuring yours truly sittin’ high above and watching the action take place,” says Hip-Hop icon Snoop Dogg. “All you TEKKEN TAG TOURNAMENT 2 fans better get ready to experience kickin’ ass on Tha Boss Dogg’s stage with my new song KNOCC ‘EM DOWN banging in the background. What more could you ask for? ”

With his new song KNOCC ’EM DOWN, Snoop Dogg prepares players for the next battle in TEKKEN TAG TOURNAMENT 2’s legendary King of Iron Fist tournament. Featured in the game and on the original soundtrack, KNOCC ‘EM DOWN blends Snoop’s smooth style with the lethal power of TEKKEN. The music video releasing in the next week will feature Snoop squaring off against the TEKKEN community’s most highly respected competitive fighters and model Adrianne Curry, herself a fighting game aficionado.

“NAMCO BANDAI Games America is making it a priority to bring fighting game fans a truly original experience in TEKKEN TAG TOURNAMENT 2,” said Carlson Choi, Vice President of Marketing, NAMCO BANDAI Games America Inc. “This is our first time partnering with Snoop Dogg and we couldn’t be happier with the results. He brings something completely unique to the TEKKEN franchise.

Gamers looking to connect with their favorite rapper can pre-order TEKKEN TAG TOURNAMENT 2 to gain access to The Snoop Dogg Stage, which continues a tradition of iconic stage backgrounds in TEKKEN games with the Doggfather making an appearance along with a bevvy of beautiful women. The stage will be free as part of all pre-order bonuses available through retailers worldwide. Fans who pre-order through Amazon®.com and Best Buy® also gaining early access to the first DLC characters, Michelle Chang & Angel. Players who pre-orders through GameStop® will have exclusive early access to The Snoop Dogg Stage plus DLC fighters Kunimitsu and Ancient Ogre, in addition to Michelle Chang and Angel.

TEKKEN TAG TOURNAMENT 2 improves upon the tag based combat of the original, with the latest installment introducing one-on-one fighting and solo fighter vs. tag-team battles. These new modes introduce a new style of play in the TEKKEN series and provide an easier point of access to new players, while keeping the game fresh for long time fans of the franchise.