The short story is that Kinect Star Wars is exactly what you’re expecting. You’ll wave your arm to swing your lightsaber, extend your palm to use the Force, and jump up and down and lean forward looking like an idiot to progress. They’ll tell you that this game is not ‘on rails.’ Trust me: Kinect Star Wars is on rails.

I don’t dislike Kinect Star Wars. It’s a fun experience, for sure. If you’re a Star Wars fan, you’ll likely get even more out of it than I did. Kids will love it. The demo segment I played through was short, but it gave me a pretty clear picture of what to expect with this Kinect game: no free movement.

Swinging your right hand out swings your lightsaber. A palm out on the left hand lets you use the Force to push enemies back or pick them up and toss them aside. That’s kind of fun. Picking up large obstacles with both hands up to Force them out of your way is really cool. The saber swinging is a bit less fun, and I think that has to do with the small lag you feel after each slice. The developers say that they’re working on it, but for now it makes for action that feels cool but doesn’t really look it. That split second of nothing happening kind of kills the vibe. Let’s hope they get that tightened up.

Controller-less game control is what Microsoft wants for Kinect titles, so that’s probably why Kinect Star Wars is on a guided track. A rep demoing the game calls Kinect Star Wars “target-based” instead of ‘on rails,’ but moving between these targets is on a set path. That, to me, is exactly what an on-rails game is. 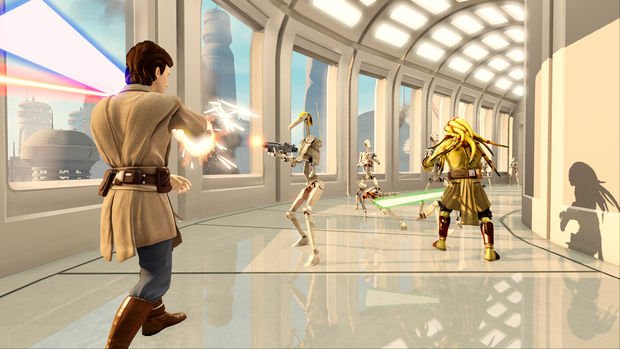 Everything’s mostly fine when you’re waving around your lightsaber cutting into baddies. The problem arises when you have to advance to the next group of enemies waiting in the distance. They don’t seem to want to come to you, so you’ll have to go to them. The only way to advance in this game is to dash forward, or in some instances, jump up and down to leap off an edge. Unfortunately, dashing forward in this game is performed by leaning forward on one foot. The resulting on-screen animation looks cool, but it never feels cool, and even in this short demo I began to feel silly leaning into the screen to move. What’s worse is that sometimes it doesn’t even work, which has you doing repeated leans and lunges. The only upside I see is that all the lunging forward is probably good for your abs.

I’m not trying to be harsh. Kinect Star Wars certainly looks good. There’s a fair bit of polish in the presentation. And it’s not done yet, so it’s not fair to write it off. But you’re not going to be controlling your movement by any other means than leaning forward or jumping, and that stops being fun pretty quickly. The fantasy of waving a lightsaber around has been realized, but that’s about it.