Stuff you should know: I am not a vampire, I am not employed by Bethesda, and I didn’t complete Skyrim, not even the main quest. That’s okay, though, because Dawnguard isn’t more of the same. It’s a 15-20 hour expansion based around new ideas in new areas that are tied to new characters.

Whether you want to become a Vampire Lord now or later is the player’s call to make. Whether they should make that call at all is an entirely different discussion, so let’s talk! 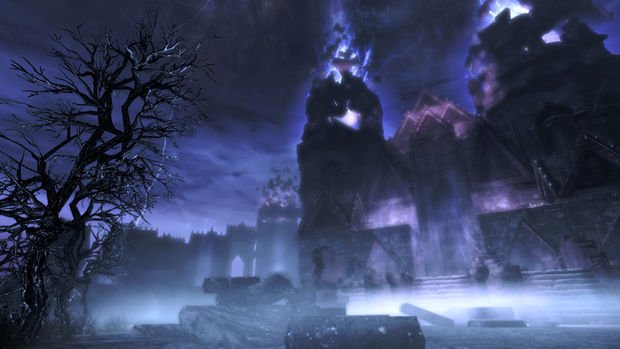 The hands-on E3 demo of Dawnguard starts five hours into the expansion. I am already a Vampire Lord with abilities that make Morrowind’s lycanthropy seem like child’s play. By activating the power (right bumper/shout button), you change into vampire form which grants you access to a new vampire perks tree, including some of the game’s most outrageous spells.

As a vampire, you can transform into a group of bats and quickly warp across a room, lift characters off the ground and choke them Darth Vader-style, and even summon a gargoyle to join your winged, bad self. As cool as these spells are, being a vampire has its downsides. Some technical, others mechanical. 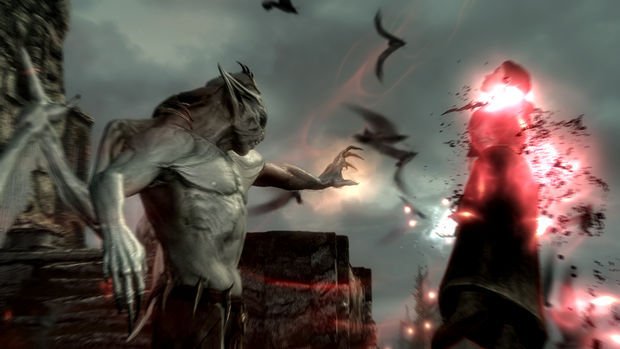 The third-person view of Skyrim was a vast improvement over previous Bethesda games, but you’d still be hard-pressed to find players who prefer it to first-person. It’s baffling to me, then, why the vampire form restricts the player to third-person combat. When I asked the developers about the decision-making process behind this, they sheepishly replied, “Well … it’s what we did for the werewolf in Morrowind.” Making the same mistake twice is a defining trait of Bethesda, so maybe I shouldn’t be so surprised.

No matter what, third-person will be less immersive than first-person, but that doesn’t mean it has to be bad. Dawnguard is bad because the animation, combat, and movement of the vampire is incredibly awkward — a few steps back from what Bethesda achieved in Skyrim. The vampire shuffles forward with his hulking body obscuring most of your view; his hand-to-hand combat has a considerable amount of lag on it; and transforming in and out of vampire form is awkward. Then there are other annoyances, like losing the ability to check out your map or manage inventory in the form. Because, you know, vampires are just too evil to stop and read maps. 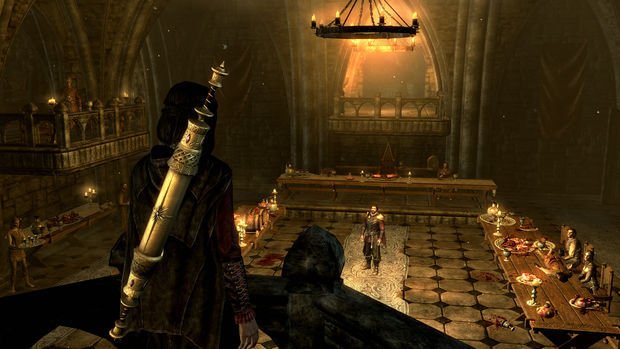 Another big concern with the vampire form is that it doesn’t complement all character builds. The vampire has some of the strongest spell-based attacks of the game, but he will quickly drain your magicka resources. As a result, you’ll want to jump into hand-to-hand combat until your magicka refills. But what if you are a mage? Or what if you are a rogue and find the vampire form often blows your cover? Bethesda didn’t really have a good response to this. It seems the vampire form will be used for brute-forcing your way through some nasty encounters. If that doesn’t work with your style of play, well, tough luck.

As in Oblivion’s Shivering Isles expansion, Bethesda is building a new area in Dawnguard that fills a void within Skyrim’s world. The demo took place in Soul Cairn, a nightmarish, gothic land of skeletons, lost souls, and other things that come straight out of a heavy metal album cover. It’s definitely something new. I’m just not sure if Dawnguard is something good. Gliding over the terrain as a vampire is cool, and I like the new powers, but there are a lot of problems that need to be addressed until this expansion meets the high standards Bethesda has previously set.