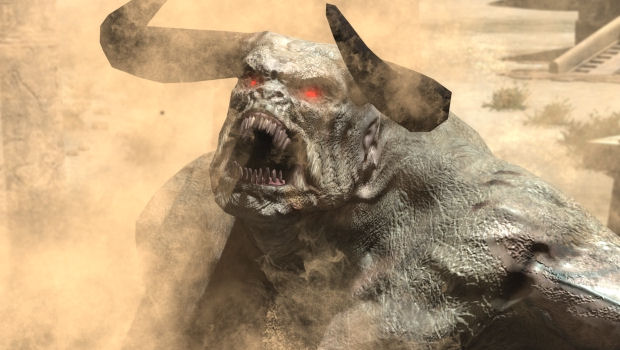 When I play a Serious Sam game, here is what I want:

When I played Serious Sam 3: BFE, I got exactly what I wanted. If you’re a fan of the series, you’ll get it too. 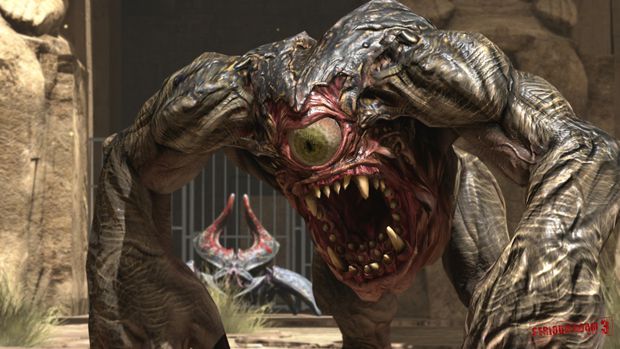 It’s odd to see Serious Sam looking so good, which is weird to say because by modern standards, it doesn’t look great. By Serious Sam standards, however, this is a significant step up, especially when you remember that developer Croteam is only a very small studio of fourteen people.

Everything you expect from a Serious Sam game is present in BFE. You know what you’re in for when the guy presenting the game calls cover systems “Bullshit” and applies a similar description to the idea of limiting players to only two weapons at a time. Indeed, in Serious Sam‘s world, it would be bullshit, because you don’t want to be denied an arsenal that includes shotguns, chainguns, rocket launchers and portable cannons.

New weapons include shotguns that fire explosives and an assault rifle with a scope. The rifle was a controversial decision, seen by some as a concession to the Call of Duty crowd. I am pleased to report that it doesn’t change a thing. In fact, Croteam replaced the original Sniper Rifle with it, and with no cover, all you’re doing is running-and-gunning with the added ability to get a closer shot. It’s pretty useful for picking off individual suicide bombers in the distance. Outside of that, rest assured that you wouldn’t be crouching behind walls or regenerating your health. 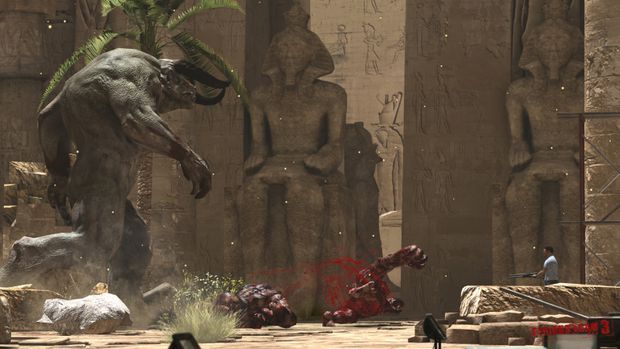 Melee attacks are a new enhancement to the experience, but they fall in line with what you’d expect from Serious Sam. Sam gets a sledgehammer now, with which he can easily cave an individual enemy’s head in, or swing with a 360 degree arc to take out crowds. Every enemy can also be executed with a button press. Animations are yet to be decided for all of them, but the one I got to see — Sam ripping the eye out of a cycloptic Gnaar — was astounding. Not so much for the pedestrian eye-ripping, but more for the fact that the victim then proceeded to scream in horror and stagger from left to right, spraying illogical amounts of blood all over the floor and walls. It was deliciously morbid.

The game begins with a short tutorial, one that may lead you to believe that Sam’s gotten boring. Aliens appear one at a time, and you’ve only a sledgehammer with which to pound them. Of course, this is a mere feint, as the moment you get a gun, you round a corner to find a small army of headless warriors and other assorted baddies. From then on, it’s the same kind of Serious Sam experience you’ve come to expect — huge killing fields, inviting power-ups that spawn new opponents, and waves of increasingly difficult monstrosities.

Despite the flashier graphics, Serious Sam 3 willfully sticks to its roots, and is all the better for it. The elegant simplicity of the series’ formula is what keeps fans coming back, and they’ll be pleased to know that they’re getting the same experience — except a little prettier and much bigger, with explosive shotguns. 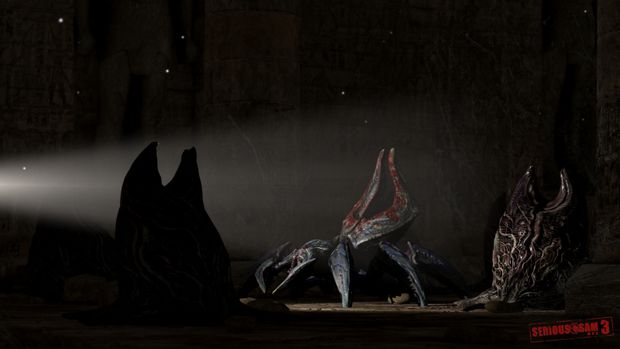 Destructible environments are one new feature and they help add to the chaos. It’s much more satisfying to mow down legions of Mental’s troops when walls are coming down around you. Your Cannon is the best for this, although enemies themselves can often blast or simply run through solid brick walls. You can’t just camp behind a building if a Werebull is on the rampage now — it’ll smash through that building just to get to you. This game is committed to robbing players of cover, because that’s not how a MAN fights aliens, damn it!

Serious Sam: BFE is not going to be the most refined experience you’ll ever play, but we all knew that would be the case. However, it’s shaping up to be a huge fat load of good, honest fun. Free of that overbearing pressure to rival the likes of Call of Duty or Halo, Serious Sam is able to concentrate on simply providing the maximum amount of carnage for the smallest entry fee. It’s looking set to succeed.