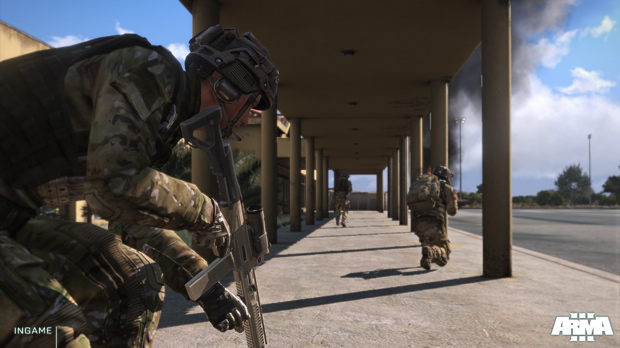 Bohemia Interactive Studio is showing off a few complex sims at E3 this year, one of which is Arma 3. To its credit, even a slowly paced, open-world shooter can provide enough unique variety to get a tired editor smiling and nodding his head.

In this industry of shooters where crap is happening all around you, you and your enemies are bullet sponges, and you retain the accuracy of a robot, a sim actually has a unique appeal of its own. 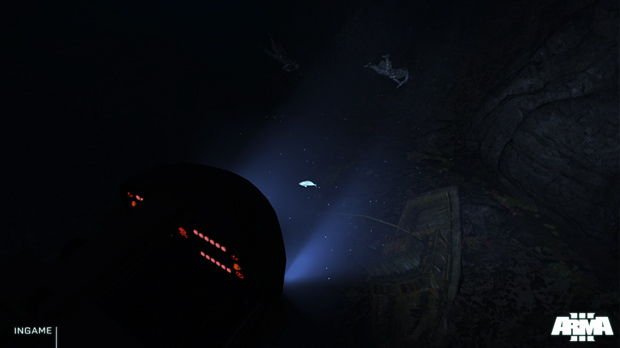 Arma 3 strips down all of the flash and flair of the typical first-person shooters that make us feel like a badass meathead (and those that actually feature meatheads), and keeps things closer to the level of combat simulators. The great thing about this third installment is that it quells a lot of the user friendliness issues that its predecessors suffered from. While it does remain a bit less intense than other shooters, and features a large emphasis on strategy and tactics, the menu system, controls, and mission system have been streamlined to be more easily accessible to people who might not enjoy steep learning curves.

Players are provided a base camp, where they can receive all of their missions, set up their equipment, and even do a bit of training. For such a large and persistent game, it’s a good idea to have everything center on a home base where it all can be managed. It even looks cool for such a glorified “main menu,” retaining the semblance of a forward command post in the middle of the boondocks.

This all leads to combat that really doesn’t have much in common with anything you’ve likely played. Soldiers run at the medium-brisk pace that an actual person would, and don’t reload their guns like they’re trying to break some Guinness record. Missions take place in maps that go on for several miles, and don’t provide any clear direction on how to approach the target area. So imagine you’re an actual soldier that has to infiltrate some small town in the middle of nowhere, and you’ll have an idea of how this game plays. 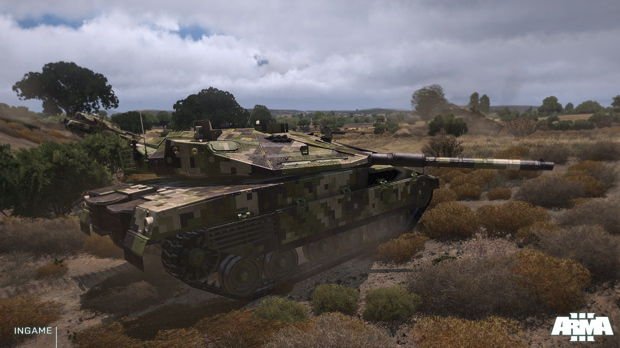 The combat is great, though. Guns recoil no more or less than someone experienced with firearms would expect, and actually take down enemies (and you) in only a few hits. That’s right, Arma 3 doesn’t let players take ten bullets to the chest, then hide around a corner and shake it off — like they’re playing as Wolverine or something. One or two hits will basically finish you, and I really liked it that way. I sort of miss the days of Rainbow Six when getting shot with a freakin’ gun actually killed you. Because, you know, that’s kind of supposed to happen.

My favorite part of the game was the underwater combat. You read that correctly: some missions actually take place beneath the waves. Players will don scuba gear, wield a prototype water-functioning assault rifle, and drive around one of those classy miniature submarine things that Navy SEALs drive. It’s an interesting thing to be the first shooter (that I can think of) that has gunplay in the ocean. I will admit it was a bit odd that enemies just sat there and floated about in their own scuba gear, waiting for me to arrive. Honestly, who guards shit underwater by actually being underwater?

Nonetheless, Arma 3 was an interesting change of pace. If you’re a bit tired of the traditional Hollywood-style gunplay that virtually every other shooter at E3 has to offer, then perhaps this game should remain in your sights. Heck, I’ll admit that even I’m going to keep an eye on it, just because it’s such a shift from what I’ve been playing for years.

Expect Arma 3 to occupy your PC later this year.