The final game I checked out at E3 was the PS Vita port of Retro City Rampage, the title I was most looking forward to playing. With the copious amounts of hands-on previews and the frustration of its seemingly endless development, I have been beyond antsy. It was supposed to come out last month!

I rubbed shoulders with creator Brian Provinciano, who guided me through several game modes including the three crossover minigames: ‘Splosion Man, Virtual Meat Boy, and BIT.TRIP Runner. We’ve seen videos of the former two games, but Runner has been hiding in the shadows until now. 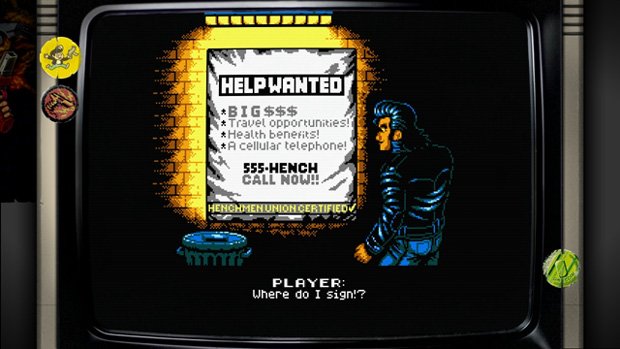 Before I discuss the minigames, let’s talk the main campaign. I was worried that with the constant coverage and the various Easter egg reveals, there would be no surprises. Rest assured that Brian has been keeping his cards close to his chest. In the first couple of minutes, I saw the Mega Man 2 building, a guard on the roof of said building shooting a duck from Duck Hunt, and a Joker-like criminal named Jester. There were probably more secrets that I failed to pick up on, but these immediately stuck out.

Sure, you might have heard of or seen these “secrets” already, but their appearances are so frequent and numerous that you can expect a constant stream of cameos every second. For example, Brian told me that the jetpack you eventually receive is given to you by Billy Campbell, the actor who played the Rocketeer in the film of the same name, having given permission for Brian to use his likeness.

I took part in a heist, driving a car that controlled like the vehicles in R.C. Pro-Am, running over civilians and collecting coins. On the streets, you can choose to shoot your weapon either by running in a direction and pushing the fire button or by using the second stick, effectively granting the opportunity to play the game as a twin-stick shooter.

The minigames themselves are spot-on recreations of the originals save for Virtual Meat Boy, in which you run towards the screen and must dodge spikes and sawblades while collecting bandages. I was unable to try out the stereoscopic 3D, unfortunately, as Brian seemed to have misplaced his cardboard glasses.

‘Splosion Man is just as challenging as the original. You must blow yourself up to cross pits of acid, launching yourself into the air after each explosion. You must time the blasts perfectly in order to gain extra momentum from exploding canisters.

Finally, BIT.TRIP Runner finds Commander Video collecting power-ups as he hops over obstacles. Unfortunately, there are no assets for Runner, but I’m sure Brian will release a teaser trailer eventually as he did for the other two.

As amazing as my playthrough was, I miss not being able to listen to the soundtrack, composed by Jake “virt” Kaufman, Leonard “Freaky DNA” Paul, and Matt “Norrin Radd” Creamer. There were no headphones on hand, and the din of the show floor drowned out the Vita’s tiny speakers.

The Vita seems like a perfect fit for RCR. The screen is just large enough that the super tiny details are still clearly defined. It’s the perfect portable experience, and I’m glad that the option is there for gamers on the go. It’s not like you guys don’t have a bazillion other options — Retro City Rampage is also coming to WiiWare, PSN, XBLA, Steam, and GOG.com, remember?

It’s all on you now, Brian. C’MOOOOOOOON, man!