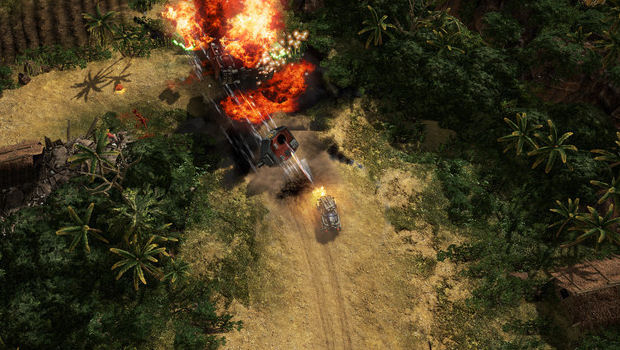 When I saw the logo for Renegade Ops at SEGA’s expansive booth, I felt my eyes dry up and shrivel with sheer, unadulterated apathy. The name sounds like a crappy generic military shooter from the likes of City Interactive or another lower-tier publisher. I can’t think of a less appealing title.

It was much to my surprise, then, that I found out Renegade Ops is like Micro Machines with guns. A top-down shooter in which you control a little car that skids and rolls around with insanely fun physics, Renegade Ops plays exactly like a game NOT called Renegade Ops. There’s been a lot of grassroots discussion around the game at E3, and with good reason — it’s just bloody fun.

The game boasts four-player co-op and each car has its own specialization. The one I controlled could periodically release EMP blasts that immobilized enemies — a very useful skill since enemies are in abundance and range from pitiful humans to full-on tanks. All of them will be decimated as you complete simple objectives and grab as many points as possible to do better than your team mates.

Perhaps the most encouraging thing about the game is that it’s taken a huge influence from Saturday Morning cartoons. SEGA’s Ken Balough described the game’s villain to me as a Skeletor/Cobra Commander type of over-the-top baddie, and the overall game is being pegged as a spiritual homage to G.I Joe.

This is SEGA’s first totally original digital IP and I’m very much looking forward to checking it out. If you want further indication of its potential, know that it’s been developed by Avalanche Studios, the guys behind the Just Cause games. That same sense of cartoony destructive fun is carried over into the game, with the ability to drive and crash through almost any structure in the game, not to mention the chance to power-up your weapons and cause serious mayhem.

It’s a simple game, but all the more fun for it. I think you’re going to seriously enjoy it. Renegade Ops is due out for XBLA, PSN and PC.