After pulling myself away from Johann Sebastian Joust for a few minutes, I got to spend some time playing The Moonlighters at E3’s IndieCade. The Moonlighters is being developed by Red Dragon, which currently only consists of two guys: Teddy Diefenbach and Mike Sennott. They’re currently searching around for a publisher to bring this game to the masses.

I really hope their search proves fruitful, because what I got to play at E3 was an absolute delight. The Moonlighters is an isometric heist game about a group of actors who used to perform movie heists, but their movies aren’t profitable anymore so they decide to perform real heists. If that premise doesn’t already get you interested, I’m not sure what will.

When Allistair Pinsof described the game to me, I immediately thought of Monaco. However as soon as I actually saw and played the game, it became clear that the similarities end after “heist game.” Despite being a game about stealing, stealth isn’t exactly the main mechanic. Things are a bit zanier, and getting spotted isn’t the end of the world. 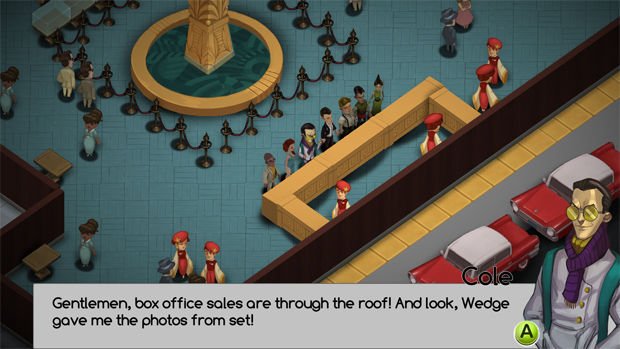 You’ll get to choose which character, each with their own abilities, gets to take part of each segment of the heist. It doesn’t seem like you could make a wrong decision for each job, but it looked to me that some characters were better fit for specific roles.

You’ll only play as one character at a time, but they will all be needed to move forward. For example, after I finished creating a distraction with one member, it switched me over to another member automatically and I could slip by that very same room as the distraction was going on.

The music was perfect for the heist gameplay. It was fast and frantic when things were ramping up, and calm and jazzy when the narrator was speaking. The 1950s aesthetic is something that I don’t think I’ll ever get tired of. It’s one of my favorite eras in history besides the 1920s (both decades are actually pretty similar).

I’m very excited by both the plot setups and environments that the full game will have. I was told that the later levels will be less cliché than a bank heist, and not all of them will go flawlessly by design. The Moonlighters is aiming to be a downloadable console release alongside PC and Mac versions. From my rather brief time with it, I’m pretty keen to follow its development.