Remember that incredible live gameplay session of The Last of Us we saw at Sony’s press conference earlier this week? I’ve watched live gameplay of that same section of the game one more time since then, but it was approached with a different play style this time, and that made for a completely different experience. The Last of Us was built to change with player choice, meaning that even small decisions have the potential of setting up entirely new situations.

The very beginning of the press conference presentation has Joel and Ellie coming across a movie poster, and Ellie says that she has noticed several of the same posters around throughout their travels. The conversation ends there because the item was not checked to be interacted with, but in this playthrough, Joel responds, saying that he actually saw the movie before the outbreak. From there, a new narrative moment opened up, giving the player a new perspective.

Joel and Ellie still end up working their way into and through an old hotel, but when they finally manage to work their way up to a rooftop clearing between two floors, instead of trying to flank around a group of scavengers (and being caught and forced into a gunfight), Joel sneaks under the windowsill where he finds them to throw a trash bottle in as a distraction.

And instead of barging in with a gun, Joel quietly sneaks around behind one of them, holding a gun to his head (“Not a fucking word!”), and then strangles him and drags him into another room. For the last of the scavengers, Joel and Ellie quietly move around him, avoiding conflict as they climb up a dresser into a hole in the floor that leads to the next floor up.

On that next floor, Joel finds bandages in a bathroom and uses them to tend to his wounds. In the press conference presentation, he used similar bandages and a bottle of booze to create a Molotov fire bomb instead. This shows that the player is free to choose how they use their findings, and that items found can be used offensively or defensively. 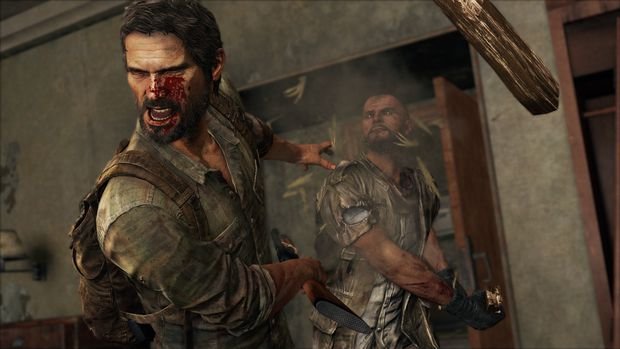 In some gameplay that went beyond the press conference demo, Joel and Ellie continue on through this next floor, using a mixture of stealth and brute force to take on a few more enemies. A standoff occurs between the last remaining scavenger and the duo, which has Joel trying to track him down, shotgun armed. Joel barely dodges a fire bomb and manages to take him out with a bullet. Moving on, Joel and Ellie try to continue on by climbing up an elevator shaft. After boosting Ellie up, the elevator falls, sending Joel several floors down into the basement, which was flooded with water.

In The Last of Us, the AI was crafted so that the humans in this world react based on what weapons you expose. They read your defenses like a poker hand and react appropriately. Group behavior in the AI has it so that all enemies are aware of each other, and they’ll work together to take you down. For instance, if they find a body, they’ll work together to investigate and find out who killed this person. All of this work helps to provide an experience where it will seem like you’re up against other humans stuck in the same world, trying to survive. 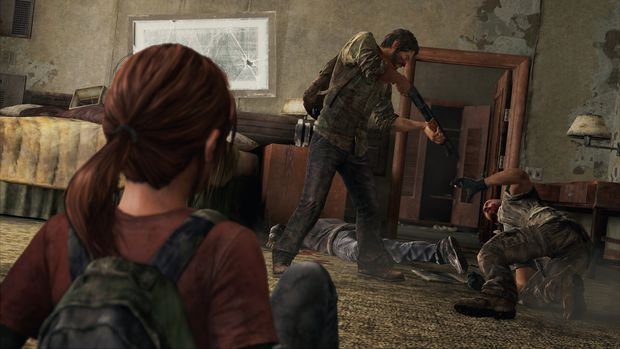 Ellie’s movement and behavior is controlled by AI that adapts to player choice and performance. There are rule sets that look for how challenges play out as you play as Joel. So, if Joel engages enemies offensively, Ellie will follow. If Joel chooses stealth, Ellie will try to follow, with her motivations falling right in line with the player’s. The game will track things like inventory, tendencies and other triggers to change Ellie’s behavior dynamically, meaning that if Joel needs help, Ellie will probably try to help out. The goal was to make her feel like another human in the same situation, and you’ll see her grow over the course of the game.

What’s exciting is that all of this comes together to make for a game that plays out differently every single time. In this demo, for example, Joel and Ellie could have taken another path toward their goal, with different items and obstacles for them to deal with. And even on the same path, with different actions, Ellie’s reactions would also change, making for a different experience. The AI would have enemies also reacting differently, perhaps moving differently, or changing their tactics. 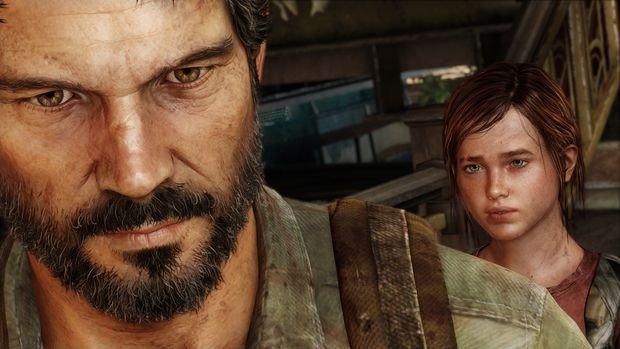 The work that Naughty Dog has put into The Last of Us could bring us an experience that goes far beyond the scripted, segmented play that we’ve become accustomed to. To me, that’s far more exciting than the post-apocalyptic setting or cinematic presentation.