The Persona series is often regarded as containing some of the best games that the RPG genre has to offer. Now, though it may not be the most obvious direction, the characters from Persona 4 and even Persona 3 are about to throw down the gauntlet in a fighting game.

Persona 4 Arena is being developed by Arc System Works, the same team behind the BlazBlue series. As soon as that information was announced, I knew this was going to be a fighting game worth playing. I finally got to get some hands on time with the game and I had an absolute blast.

First things first: this game looks PHENOMENAL. Just like BlazBlue, Persona 4 Arena features some of the best hand-drawn art out there. While the screenshots already look gorgeous, once you see the game in motion your jaw will drop. The music from the Persona series is also back in full force with some beautifully composed rearrangements.

Persona 4 Arena uses a four-button loadout, something that isn’t too common in one-on-one fighters. Two buttons act as your character’s attack moves, while the other two utilize your Persona. Special moves use the traditional motions that we’ve been accustomed to, but the fact that you have both a character and a Persona makes each move list rather deep. It also helps to make each of the thirteen characters feel diverse and unique, something that BlazBlue was known for. 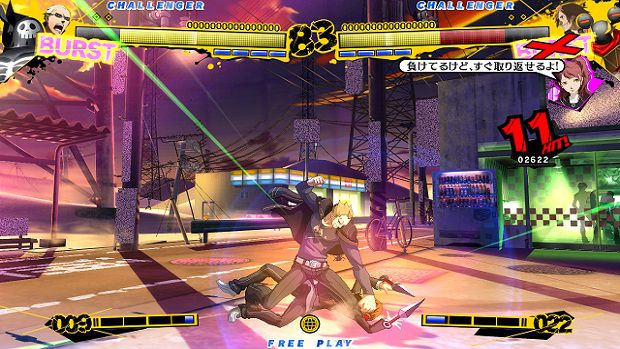 Some great fighting game mechanics have been included in Persona 4 Arena, such as the Persona Break. If your Persona takes too much damage while it’s out, a Persona Break will occur and disable your Persona for a brief period of time. My favorite mechanic, although it isn’t new to fighting games, is the defensive Burst mechanic that allows you to burst away your opponent mid-combo. There’s always so much strategy and depth to using this mechanic at the right time whenever it is included in a game, like the recent Mortal Kombat 9. Your SP bar will determine when you can use things like Supers or your Burst.

The one thing that I wasn’t into was the use of double motions for the Supers. This can often be difficult to pull off, especially for people who aren’t into fighting games. The four-button control layout makes it way more accessible to newer players, but double motions for Supers is sure to frustrate its fair share of players.