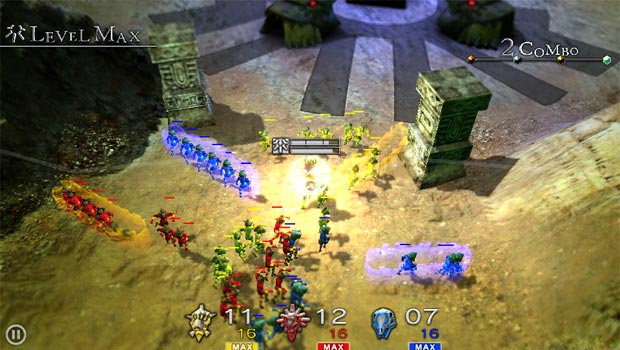 Orgarhythm is the most difficult game I’ve ever tried to explain. In fact, XSEED had a hard time explaining it to me. It wasn’t until I played it that I was fully able to understand what it was all about.

A hybrid between real-time strategy and a rhythm game, Orgarhythm is breaking new ground, and true to XSEED’s history of bringing over obscure and interesting titles, we have them to thank for it. They noted that people haven’t been covering a whole lot of this game solely because it’s so hard to explain, so I’m determined to give it a try!

Starting from the top, Orgarhythm has an interesting story. Two gods who are also brothers inhabit a planet. The eldest, with a destructive nature, takes to the core of the planet to thrive on its energy while the younger, with a creative nature, resides on the surface to enjoy the sun and sky. Each god spawns followers, and it isn’t long before the minions of the elder god find their way to the surface and begin to wreak havoc. Faced with the decision of siding with his brother or his creations, the younger god decides to fight back, and that’s where Orgarhythm begins.

The game is stage-based with twelve stages and corresponding bosses. Players take on the role of the younger god who marches through stages on a set path and at a set pace (on rails) while issuing commands to his minions to fend off incoming enemies.

These minions come in red, blue, and yellow varieties, with blue being weak to yellow, yellow being weak to red, and red being weak to blue. You can decide whether they’ll perform melee attacks against nearby enemies, ranged attacks against enemies on cliffs or behind obstacles, or they can construct a catapult to siege large targets in the distance. You’re essentially trying to protect your god who has a set amount of hit points, and when they reach zero, the game ends.

You might say this sounds a lot like a strategy game so far, and you’d be right. The rhythm elements are experienced through the interface. Players will repeatedly tap, tap, tap, and swipe on the Vita screen (there are no button inputs in Orgarhythm) in time with the music, with the track’s tempo determining how fast you need to enter these commands. The first tap selects the god, the second the color of the minion, and the third the type of attack desired. The swipe determines the placement of your minions: do a small swipe to dispatch one or two minions to do the job, or a wide swipe to send all of your troops forward. This takes a lot of getting used to as you’re constantly doing this in time with the music, but once you get into the swing of it, it’s a lot of fun.

You receive bad, good, cool, and excellent ratings for each input, and doing well raises your level, adding additional elements to the backing music as well as increasing your number of minions. Presses that fall out of the rhythm conversely decrease your level and result in minions fleeing your side. They’re also building a lot of replayability into the game, as the enemies are programmed to remember your tactics and change accordingly to counter your gameplay style on subsequent playthroughs. 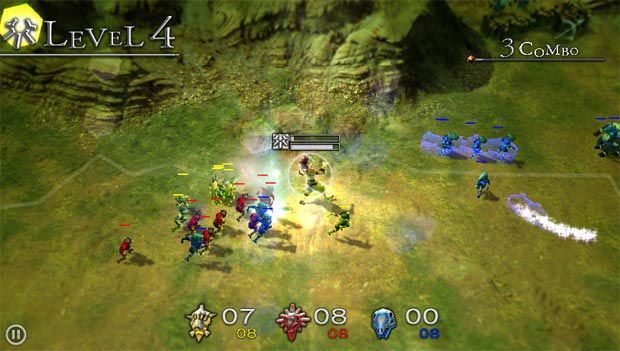 Music and sound are vital to the Orgarhythm experience. Music is handled by composer Ayako Minami, known for her contributions to the Armored Core series and Enchant Arms. After a dreamy and beautifully animated opening video, the first stage gets a soothing electronic track with accompanying woodwinds to lend an organic edge. As mentioned, as your level increases, more elements are added to the music, so while at level one, you may only hear a bass drum, woodwinds and more are added as you increase in level. The second stage we saw featured a more rock-oriented track with wailing electric guitars that was also cool. Interestingly, XSEED will be holding a competition on YouTube for artists to submit their music for the game, and once winners are selected, the in-game soundtrack will be able to be swapped out for these user-submitted ones.

There will be cooperative and versus modes as well. In versus, players go head to head, whereas in cooperative mode, you share the same minion pool and have to work together to ensure neither one god is left defenseless.

The game is slated for a summer 2012 release date, but the hope is that it will ship simultaneously in North America and Japan this coming August. They’re determining whether or not this will be a digital-only title, which would unfortunately exclude any sort of pre-order bonus or the pack-ins that XSEED is known for providing to fans.

I can’t be excited enough about Orgarhythm at this point. It looks, sounds, and plays beautifully. It’s a beast to explain, and I hope I’ve conveyed some of what it’s about, but this is one that really needs to be played to understand, so hopefully there will be a demo available at some point to let people know what Orgarhythm is all about.

Let us know what you think of Orgarhythm so far. Is this blending of genres a brilliant innovation or n forced stretch?