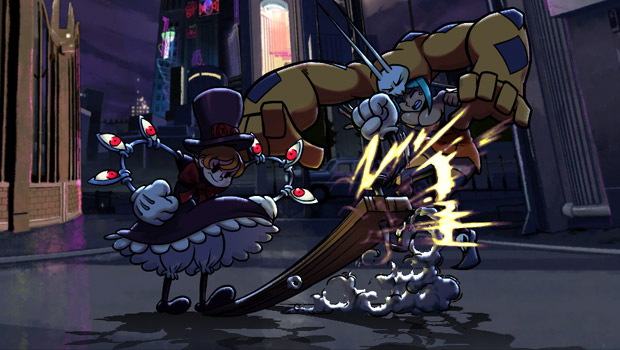 A new build of all-girl fighter Skullgirls was playable at E3 last week, and I got a chance to give it a spin. As Jonathan Holmes noted back at PAX, Skullgirls is a game made by fighting game fans for fighting game fans. It is beautifully animated and features a stunning soundtrack composed by Castlevania alumni Michiru Yamane. Nothing but good things, nothing but good things.

The aim of developer Reverge Labs is to make the most balanced yet most fun fighter possible, and that means focusing on quality over quantity. The game’s proposed final roster of only eight characters may sound ridiculous, but there is so much love and individuality poured into each and every one that it’s like you are getting more person… per person. Know what I’m saying?

So far, only two gals have been shown off — Filia and Cerebella. Both happen to have crazy living hats and big bouncy boobs, so you’d be forgiven for thinking the rest of the cast would carry those same traits. I know I did going into the demo. Then I met newcomer Peacock, and all my preconceived notions were shattered. Peacock may just be, in my opinion, the greatest fighting game character EVER! 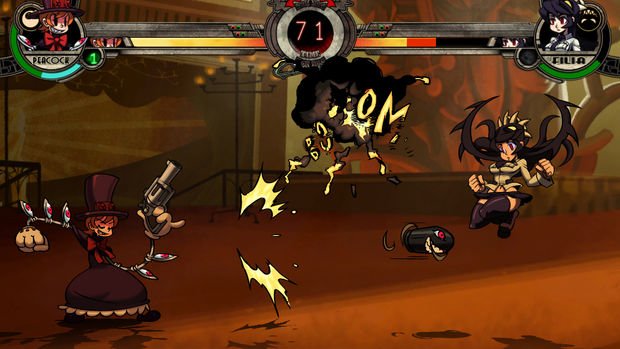 I highly doubt there’s ever been another fighter that does what Skullgirls is doing with Peacock. She is the embodiment of the Golden Age of Animation. Her DNA draws inspiration from Walt Disney, Ub Iwerks, Tex Avery, Chuck Jones, Hanna-Barbera, and everybody in between. She is Felix the Cat, Mickey Mouse, Tom, Jerry, Popeye, and Bugs Bunny rolled into one volatile, squash-and-stretch firecracker who absolutely doesn’t give a flying hootenanny.

She really needs to be seen in motion to be fully appreciated. Watching her idly bouncing along to a peppy “talkie” soundtrack that only she can hear, blinking with her iris-less black eyes, and twiddling her gloved fingers, I got taken back to an era when cartoons could be violent and no would question them.

That pioneer spirit is reflected in her repertoire of zany abilities. She pulls out a shotgun and fires comically oversized rounds. She tosses out anthropomorphic bombs that march toward their target. She summons elephants from the sky to land on her opponent. She manipulates time and space in a way that would make Droopy or even the Warner children look like amateurs. She even whiffs a football punt, Charlie Brown-style!

But she’s got that dastardly razor-toothed grin. She’s a vicious killing machine who chomps down on fat cigars then sets you on fire with ’em. Despite all that, she’s totally adorable! She’s an enigma — what will she do next? Where are those pies coming from? You don’t know, and it’s exciting!

If the remaining five Skullgirls characters are even a quarter as creative as Peacock, the game will have no trouble making a big name for itself when it launches later this year on XBLA and PSN.