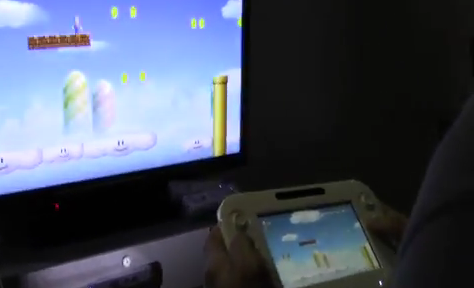 The main thing I took away from this demo was how comfortable and easy to use the Wii U’s controller is. Those of you who are intimidated by the thing because of it’s large size need not worry, it’s very light and easy to manage. Dropping the game down from the TV to the controllers screen was also a cinch.

As someone who never took to the bulk of the of motion controlled titles on the Wii, it’s great to know that the Wii U’s default controller works so well with “traditionally” controlled games. The only thing that took a little getting used to was having the left analog stick on above the face buttons, but even that only took a few seconds to adjust to.

And everyone say “Hi” to Nintendo Power’s Chris Hoffman, who makes a cameo appearance in the video.