I freaking love Burnout. Rewarding wanton destruction in a race is right up there with the printing press for the greatest accomplishment of our species. When Criterion took the stage at the EA press conference, I hoped it was a new, full-fledged Burnout. I wasn’t totally wrong. While Need for Speed: Most Wanted, doesn’t carry the Burnout moniker, it still feels very much like utterly ridiculous arcade racer we all know and love.

Most Wanted takes a lot of cues from Burnout: Paradise. Players will have an open world and spend effectively zero time sifting through menus and messing with things like tire pressure and suspension height.

Instead, the focus is on a dynamic, driving experience that keeps you in the action and away from loading screens. Switching cars, getting new paint jobs, repairing vehicles, and the like all take pace in just a couple of seconds. 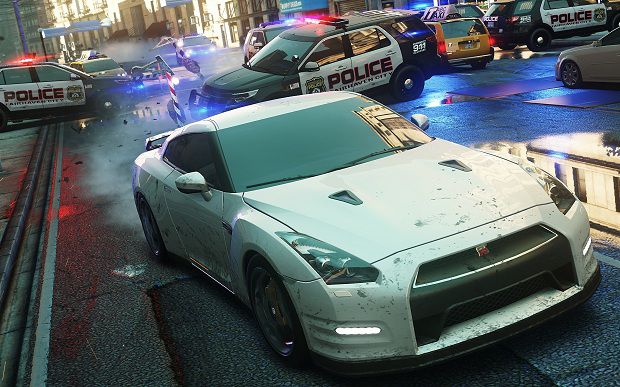 The Burnout series’ signature takedowns, tricks, and boost (aka “nitrous”), are all here, but the cars are quite a bit heavier. You can’t, for example, hit the nitrous and immediately accelerate so fast that Danica Patrick’s eyes bleed. Vehicles are able to take a lot more punishment as well, giving the whole game a death-rally feel.

The core of the game is built around collecting SP, or “speed points,” and everything you do is recorded via AutoLog. The more ridiculous and daring your stunts, the more points you earn. As you go, you’ll rise up the list of “most wanted.” These points can be spent to unlock cars and upgrades and items to customize your cars and build up your collection.

I squeezed out almost a full hour with a bunch of other game journos in a variety of multiplayer events. We had everything from distance jumps, slaloms, checkpoint races, top speed in a given time, and most takedowns.

Taking people down in races is especially satisfying as it removes them from the competition. When a player is taken out, however, they can come back and harass other players. It is entirely possible to knock everyone out and keep anyone from winning. It’s devious, douchey, and utterly delightful. 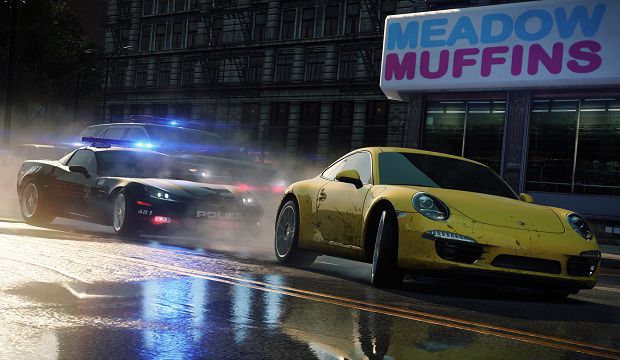 For single-player, they’re adding a ton of tiny new features. There are, for example, dozens of super and hypercars hidden throughout the city. If you are being pursued by the cops, you can jump into one as a quick way to lose them. The instant-paint, body repair, and car-switch stops from Paradise are back, but with added functionality.

Unfortunately, the Criterion crew didn’t mention anything about how they’ve addressed complaints with the open-world nature of Paradise. While the focus on a continuous driving experience, free from loading screens or menus definitely has its appeal, it could be a pain in the ass to drive for five minutes or more just to start a race. So if that was something that annoyed you previously, I can’t say one way or the other that it has been fixed.

The Criterion team definitely buys into the “fun is all you need” notion, and they have done so much to execute that mantra with surgical precision. Most Wanted, for me, was an oxymoronic cocktail of sophomoric engagement and sophisticated design. Sadly, I’m going to have to wait until October 30 to gleefully tear through the streets, wiping out anything that stands in my way.

Filed under... #Criterion#E3#Need for Speed