I’ll be honest: I was scared when I saw the video example of how the Kinect sensor might with with Forza Motorsport 4 at E3 last year during Microsoft’s press conference. I didn’t like the idea of a top racing franchise opening up to hands-in-the-air bus driver style casual driving games. Forza is fancy and I want to keep it that way.

Turn 10 did Kinect implementation right. Yes, they did work in a silly hands-in-the-air driving mode, but they did a few other really cool things to balance it out. They’re all subtle, useful things. None of them will make you run out to get a Kinect sensor, but they’re all nice bonuses if you already have one.

The coolest non-game use of the Kinect sensor for Forza 4 is in the Autovista mode. As I mentioned in our earlier preview of the game’s Autovista mode, players have the option of doing a virtual walk-around of the cars. It’s a full-blown drool-over experience: You can open doors, open the hood, get a closer look at the engine and more. There’s even the ability to get into the driving position in the car and turn the key.

The Kinect voice-recognition tech can be used to navigate the deep menus of Forza 4. Turn 10’s Dan Greenawalt says that their goal was not replace the cancel and accept buttons. The many sections of the game are hyperlinked via voice. You can just say “Forza, Community” and the system will bypass all the backouts and accepts to go directly to that menu section of the game. 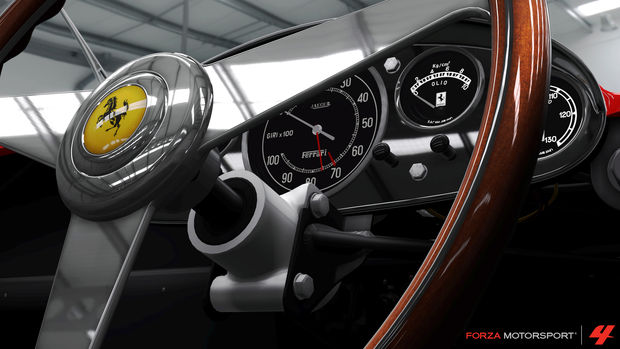 One Kinect use I was really surprised by was the head tracking in races. It was a subtle effect, but it adds just a bit more to the mix to help keep the player immersed. It was neat to see how a slight turn of the head to the right moves the interior view toward the rear view mirror. It does not give you the full ability to turn your head to look out the side windows. Again, it’s a subtle thing makes the game a little bit cooler.

I got to watch the air steering, and it looked to be exactly what anyone would expect. Tilting fists left and right turns the car, as expected. The mode has a similar control method to some iPhone racing games. Acceleration is automatic. You need to stick your foot out in front of you to brake. I can’t be sure, but it seemed that there were some driving assists helping out. This mode doesn’t look like something most racing fans will use after the novelty wears off, but it might be fun for the younger set.

The key point is that all of this Kinect implementation is optional, and that most of it is pretty slick. It’s just another set of features that makes the wait for Forza 4‘s release in October harder.