I love theme parks and I love dungeon crawling, so when I heard Critical Studios would combine the two for their debut action-RPG, I got a bit giddy.

Much like Magicka, which shares the same publisher (Paradox), DungeonLand is a loot-centric, co-op clickfest that has the action of Diablo and the comedic ambitions of Portal.

There are a lot of Diablo clones on the market as of late, not to mention Diablo III itself. DungeonLand stands out for a couple reasons.

Its bright, cartoon visuals make me think of Team Fortress 2 and kittens, instead of the numerous dark fantasy RPGs that flood the market. DungeonLand embraces this concept, bringing the food courts, rides, and other places that populate theme parks to life. I often get fatigued by the dreary, lifeless worlds of action-RPGs, so this is a welcome change of scenery. 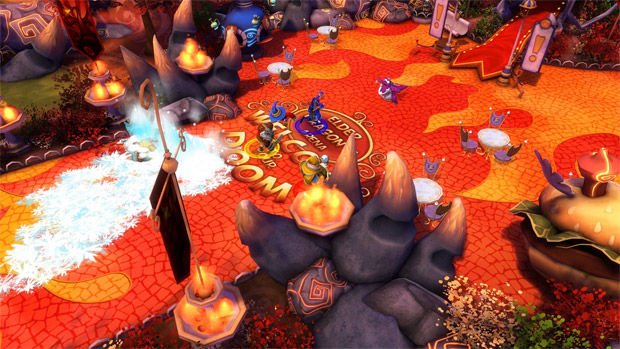 Another interesting aspect of DungeonLand is its AI director. Like Left 4 Dead, the game will change up placement of items and enemies on the fly, taking party performance and resources into account. You can also have a fourth player take on the role of dungeon master, strategically placing enemies across the map in real time.

With quick drop-in/drop-out co-op, tried-and-true mechanics, and a colorful, inviting world to explore, DungeonLand could be the sleeper hit that will appeal to more than just Magicka fans.