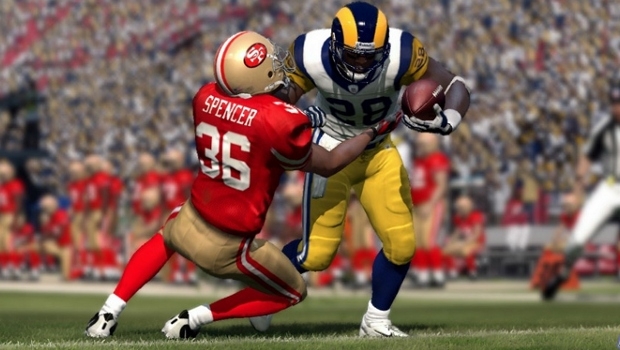 Another year, another Madden. We’ve probably reached a point in time where there are Madden fans who have forgotten than John Madden’s goofy mug used to adorn the games. As a big, stupid football fan, I’m always hoping Madden makes that quantum leap into the upper echelon of sports games, along with MLB The Show, NBA 2K, and EA’s own NHL and FIFA franchises.

After playing just a game of Madden NFL 13, I can’t proclaim that Madden has made that turn; it will take a lot more play time to judge that. Still, the game feels a lot more organic, largely because it seems to have legitimately moved away from canned animations in favor of more realistic, physics-based collisions. 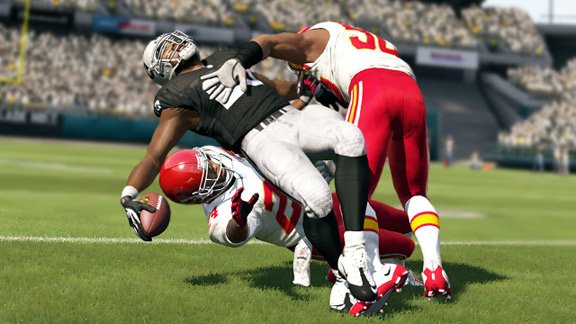 The first thing that struck me when I settled down to play was the new broadcast HUD. It’s pretty much all about the blue and looks like you’re watching a CBS broadcast. Accordingly, CBS Sports’ Jim Nantz and Phil Simms are calling the action now, entering into the rotating doors of Madden announcers that has spun around since Madden himself was removed from the game.

Personally, I hate watching football on CBS and think their blue HUD is rather unsightly, so I wasn’t crazy about the aesthetic shift. On top of that, I don’t particularly like Phil Simms or Jim Nantz as a broadcast team, and certainly don’t need to see cuts to their respective visages in the booth during game. This might satiate the crowd looking for a more true-to-life viewing experience, but I have a feeling even those people will end up mashing buttons to skip over the presentation additions soon enough.

Thankfully, the actual gameplay felt noticeably different from Madden 12. I elected to skip buying last year’s iteration and instead settled for playing competitively only when visiting friends, because I was letdown with it after promises that canned animations were a thing of the past — they weren’t — but now they seem to be, thanks to the newly implemented Infinity Engine. 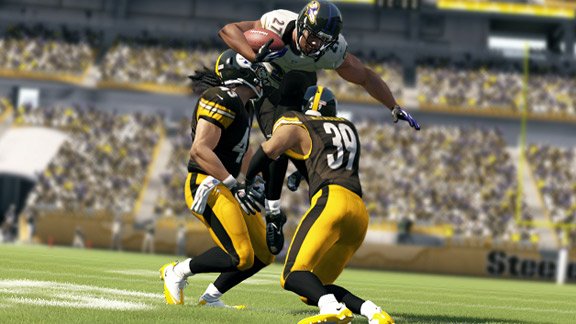 Yes, there’s finally a physics engine. While the franchise has been touting its tackle masses for a while, I finally felt like players converged on tackles and made a realistic clump of bodies haphazardly struggling against each other. The claim that’s being made is that no two plays look the same, and I did see a lot of unique reactions reflective of how hits were made and who was delivering them. Players glanced off near misses, and a few times both I and my opponent let out little gasps of excitement when a player was close to retaining his balance after taking a hit and breaking a large gain.

At one point, I barely took down the opposing running back as my last tackler barely dragged him down to one knee from behind. In past Madden games, usually when someone was tackled, they went down, but this was a great display of how the new physics system works and how the running back tried his best to stay up. There’s a palpable sense of momentum, and running in the open field feels more exciting than ever.

The physics engine also seems to have had direct improvement with blocking, something that always seems to be a problem in Madden. In short, players, including wideouts, were actually blocking for me competently. Not once in the game did I have an issue with my teammates not blocking well (or not blocking at all), and the majority of my plays were runs. Similarly, rushing the passer feels better. As opposed to either getting through instantaneously or getting stood up and feeling like you’ll never have a chance to get to the quarterback in time, I felt a lot more give and take.

One other little decision I loved was bringing the kicking game back to the right stick. Kicking is a big enough part of the game for the decision to move to a “press X” meter to have bothered me. Analog kicking is a bit more engaging and just makes more sense. No idea why they went away from it, but it’s back. 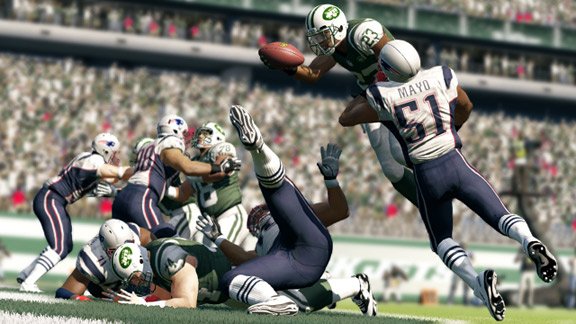 EA Tiburon is also addressing the complaints about franchise with a new system called Connected Careers, which melds online and offline franchise modes, as well as Superstar mode. You can switch between the coaching mode, which is akin to the past franchise mode in which you have full control over everything, and Superstar. Though unrealistic, you are also now afforded playcalling duties in Superstar even if you’re not in a leadership position (quarterback on offense, middle linebacker on defense).

Your performance in either mode nets you XP. There are benchmarks your players need to reach for certain XP gains, at which point you can allocate the XP to make the players better. You can also set the computer to automatically spend XP at set intervals if you don’t want to deal with allocating points and would rather just play football games. You can even get XP from practicing situational football, such as two-minute drills, finally making the mode feel like less of a waste of time.

As a whole, players feel a bit more grounded, and it’s a positive change. The implementation of a physics engine is a move the series desperately needed, especially if it’s trying to keep up with EA’s own other sports titles, while the revamped game modes bring some interesting things to the table. I’m going to want to see more before I consider picking it up this year, but it’s definitely a step in the right direction.