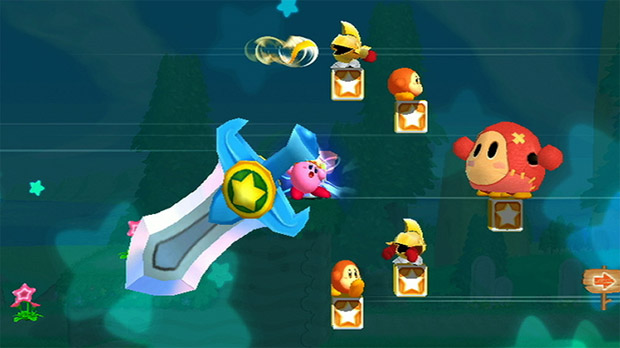 It may not have Kirby made out of string, but Kirby Wii looks fantastic regardless.

Co-op seems to be a given for Nintendo properties on the Wii; naturally, this game allows up to four players to fight some familiar faces. (Seriously, how many times have we kicked the tree’s ass?) One lucky player gets to control Meta Knight, which should be fuel for off-screen fisticuffs when mere dibs aren’t enough.

There are also Super Abilities to look forward to, like the giant sword shown in the footage above. At this point, it seems like HAL would have to actively try in order to truly mess up a Kirby platformer, so I’m expecting good things here. Fall 2011 is as specific as Nintendo is willing to go right now.