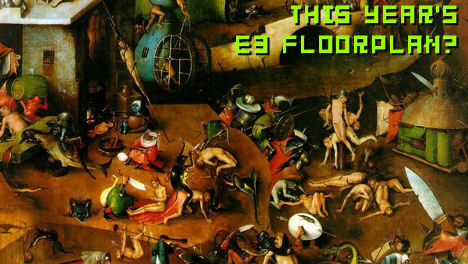 Let’s be honest here — we all know that the ESA’s public image of late is not, shall we say, spectacular? However, when the organization brings out a politician to deliver a keynote speech, a politician that has publicly backed the preachings of a half-baked fundamental anti-semite … well, it’s not going to improve the PR situation, is it?

Minister John Hagee once controversially condemned non-Christians to Hell (as ya do) and went as far as to say that Adolf Hitler had been doing the work of The Lord by “hastening the desire of Jews to return to Israel in accordance with biblical prophecy.” That’s pretty out-there as far as religious beliefs go, I’d say. Perry doesn’t really seem to mind though, if this 2006 report is anything to go by:

Gov. Rick Perry, after a God and country sermon attended by dozens of political candidates Sunday, said that he agreed with the minister that non-Christians will be condemned to hell.

“In my faith, that’s what it says, and I’m a believer of that,” the governor said.

…Asked afterward at a political rally whether he agreed with Mr. Hagee, the governor said he didn’t hear anything that he would take exception to. He said that he believes in the inerrancy of the Bible and that those who don’t accept Jesus as their savior will go to hell.

Remind me again … why aren’t companies staying with the ESA?

GamePolitics ran this story and questioned the ESA’s decision to politicize the Electronic Entertainment Expo in such a needless way. The ESA surprisingly went mad over GP’s report and accused it of … I guess, anti-ESA fanboyism?

If the ESA posted a blog and called it a news site, journalists would rightfully balk and it wouldn’t pass a smell test. Remarkably, GamePolitics doesn’t face the same scrutiny even though it’s funded by the ECA and tainted with anti-ESA vitriol. At the end of the day, calling GamePolitics a news site is as laughable as saying there’s a Cuban free press.

Ouch. Someone has their claws out.

Frankly, this whole situation is a complete PR mess and the ESA isn’t doing itself any favors by exploding at a Web site and taking childish pot-shots at its credibility. Correct me should I be wrong, but if your association is bleeding associates, it’s usually a good idea to inspire confidence in those left rather than lose the plot in this manner.

But still, tell me more of this Cuban free press. Sounds fascinating.