I’ve already called it a “Blockbuster hit,” and I feel as if every other movie-inspired headline pun has been used by someone, somewhere, so I GIVE UP.

Joe Danger was one of those games that completely took over my free time. I played it pretty much constantly until I got 100% completion. Joe Danger: The Movie takes everything that I loved from the first game and makes it even more insane. You can play as a cupcake. A cupcake!

I got to play the game here at E3 and it’s safe to say that the insane and quirky gameplay of the first remains intact. This looks to be a sequel done right; expect more levels, vehicles, modes, and especially more humor. 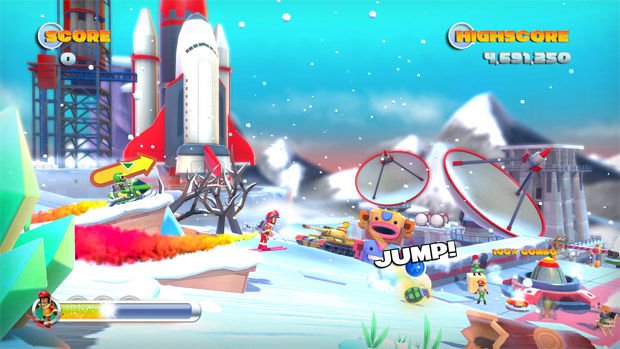 Joe Danger: The Movie contains over 100 single-player levels, each with their own set of goals. The goals vary from collecting the letters DANGER Tony Hawk style to completing a level without ever breaking your combo. The collection objectives turn the game into more of a platformer than the game may originally let onto and it forces you to play each level with a different mindset.

In fact, there is a lot more depth to Joe Danger’s movie than most people realize. There’s a certain nuance required to navigate the levels and efficiently accomplish your objectives.

I’m not sure that most people caught on to that, considering only 10% of players finished the first game. When you get into your groove, your fingers begin dancing around the controller in such a meticulous way that is simply sublime. 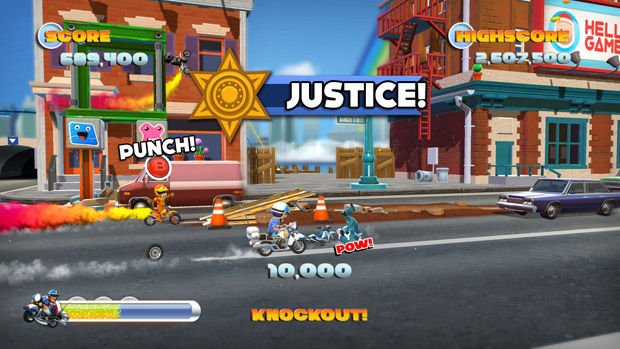 Sean Murray of Hello Games, the development team behind the Joe Danger series, told me that he wants people to, more than anything, “just have fun” while playing the game. It may sound trite, but the game exudes charm, from its wonderful art style to the clever game premise.

For those who don’t know, Joe Danger is a movie stunt man who had to pull a Stella Payne and get his groove back in the first game. It seems as if he’s in full stride now because the movie sets and stunts that he’s pulling are absolutely nuts.

I also got to play the iPhone version of Joe Danger, something I was rather nervous about before going in; like I said before, when you’re playing the console version your fingers are always moving all around the controller. Some of this is solved by always having Joe drive forward. This obviously means that the platforming-based objectives will be absent, but it’s a small price to pay for an iPhone Joe Danger that actually works. Jumping is accomplished by tapping, ducking by holding, and tricks by swiping. When you get a perfect run, it’s almost like playing a rhythm game. That “groove” is definitely still maintained, and it seems like a lot of love has gone into this mobile version to make it more than just a port.

You can expect both of these versions later this year, likely around August or September.