The venerable Insomniac working on a Facebook game is understandingly troubling to some, especially given the partnership with EA. However, Insomniac’s focus with Outernauts is to bring a full-featured, console or “core” experience to the more casual sector. I think they’re actually doing it with the turn-based, explorative RPG Outernauts.

I’ve got a lot of faith that the folks at Insomniac know what they’re doing. I love their games’ staple style, both the vibrant aesthetics and clever writing. Still, even I was surprised by just how much I was digging the game. As someone who has never played a Facebook game before, I don’t have much of a point of comparison, but Outernauts easily felt like something I could be playing on a handheld or home console — or at the very least, as a top notch downloadable title. 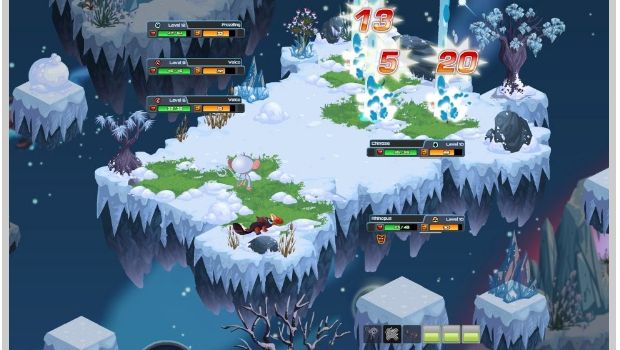 Cast as an Outernaut, an interstellar galactic peacekeeper, you’re tasked with trouncing about the galaxy and foiling the plans of the evil interstellar corporation Sludge Co., which has been mucking up the galaxy at large. Simultaneously, your aim is to capture and train exotic aliens, which ties into the overarching goal of unlocking the secrets of the ancients — whatever those might be. My guess would be embarrassing photos of them as children in a full cowboy getup riding a toy pony, but perhaps their secrets are a bit more majestic.

The game is presented as a healthy mix between linearity and openness. There is an overarching galaxy map separated into six sectors, each home to four or five different planets of varying sizes, for a grand total of thirty unique planets. Though there is an overall narrative that each planet adds to, when a new sector is unlocked, you’re free to tackle the planets in it in whatever order you like.

Once you land on your planet of choice, bright eyed and bushy tailed, you’ll find gorgeous 2D art on an isometric plane. There is a distinct style to the game reminiscent of Insomniac’s Ratchet and Clank series, which always seems to draw Pixar comparisons. I rarely saw repeated resources; for example, I trudged through a cave level that had a hugely diverse amount of fauna, as well as couple different treasure chest designs that popped. It’s a super pretty game.

Your personal Outernaut can be either male or female, and you’re able to change their hair and skin color. Additionally, the accoutrements you acquire throughout the game shows up on your character’s torso, hands, feet, and head, as well as offering helpful stat boosts. Collecting a full set nets you an even greater stat boost, as well as makes you look more stylish. 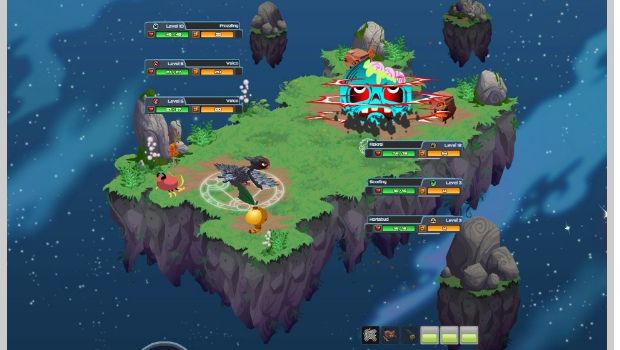 The planets I saw were relatively large in scope and filled with enough points of interest. NPCs exist on some of these planets and offer to give you simple sidequests — find my thing, kill the things — or simply lend an ear for shooting the breeze. Well, I suppose you’re lending them an ear and they’re rattling on about themselves. So much for the rules of hospitality. Along with NPCs, patches or grass or trees are clickable, allowing you to dig up things or chop down things, respectively, for a variety of things. One backwater bloke lost his keys somewhere and wanted me to find them; I found them by unearthing some tall grass.

The Pokémon element comes into play in the combat. I had access to a lovely ice gorilla, an electric alligator, and some flying thing I never ended up switching in from my party. Most of moves available have a potential residual status effect while strength and weakness against enemies is element-based. Each move takes a set amount of stamina from a gauge you refill either by napping or paying real money for restorative items to help you pull through a particularly difficult bout.

Battles can be up to three versus three, depending on how many enemies you encounter. Enemies populate the screen in real time and a click initiates battle; if other enemies are nearby, they can join in the fray, too. Additionally, there are pvp battles in which you fight with the Outernaut and beasts you’ve collected throughout the solo portions of the game.

Outernauts has a lot of charm and a lot of possibility in terms of gameplay. Everything I’ve seen so far points towards a good amount of depth, combined with some of the potentially addictive elements you’d expect for something reminiscent of Pokémon — perfect for a Facebook game. Hopefully it all comes together.