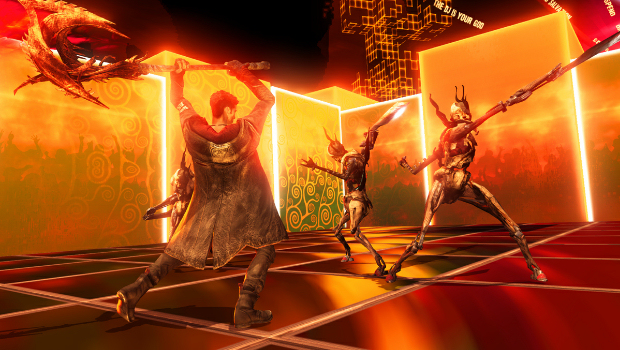 Ultimately, you want to read something that completely validates everything you decided to hate about it the moment the game was announced and you had nothing but a teaser trailer to base all of your venom off of.

Sorry boners, I can’t be your hero this day. I played DmC: Devil May Cry, and I had a blast. 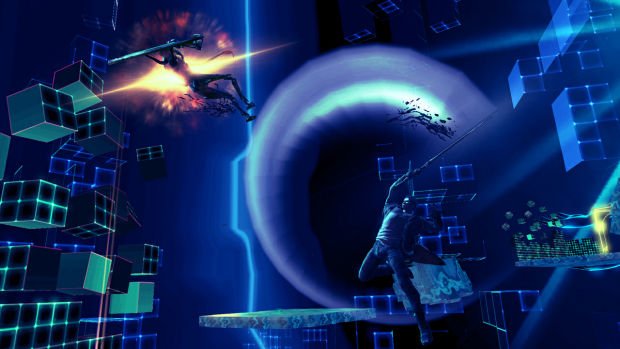 It is, of course, entirely possible that the full product could be a major disappointment. The problem with previews is that you only get a slice of the pie, and that slice could have all the good stuff in it while the rest is stuffed with feces. However, based solely off of what I played and what I saw, I feel confident in at least saying that DmC: Devil May Cry is a game that deserves more attention than simple controversy over stylistic changes. It deserves us to look at it as a videogame with some damn fine ideas and a heck of a lot of absorbing combat.

Despite fears that the game might be dumbed down, DmC feels deeper in its combat, right from the outset. Dante is armed not only with his classic guns and sword, but a demonic axe bound to one shoulder button and an angelic scythe bound to the other (you hold these buttons down, changing how Dante attacks with the face buttons). Ninja Theory has confirmed that other demonic and angelic weapons are coming, and all these items can be switched on the fly, allowing for seamless battles and instant changes in armament. At first, it’s a lot to take in, but once you’re sure of what does what and how effective it is, you feel like Devil May Cry has opened up more than ever before.

Within seconds I was using my demonic weapon to throw a chain at an enemy and draw it toward me, then slice it into the air with my sword, jump up after it, and smash it back down with an axe before peppering it with bullets upon my own descent. Or, one could always use the angelic chain and drag Dante to an enemy, combining the weapons and their various properties to deal all sorts of stylish looking death. It’s a little overwhelming for a show demo, especially when remembering to keep certain weapons readied in order to perform things like glide jumps and other non-combat tricks, but once one gets comfortable, I can imagine the options becoming incredibly empowering.

A behind-closed-doors session showcasing all-new content revealed how this switch between weaponry can affect more than just combat. The section took place in a demonic nightclub which the host was turning into a twisted perversion of reality TV (as if reality TV wasn’t perverse enough) full of brutal challenges for Dante to undertake. One such challenge involved floor panels that changed colors from blue to red. On the red panels, Dante had to constantly keep his demon weapon activated to avoid taking damage, while on the blue he needed his angelic weapon readied. A simple enough task, but once fast-paced and brutal monsters are tossed into the mix, it starts to get damn tricky to keep track of. 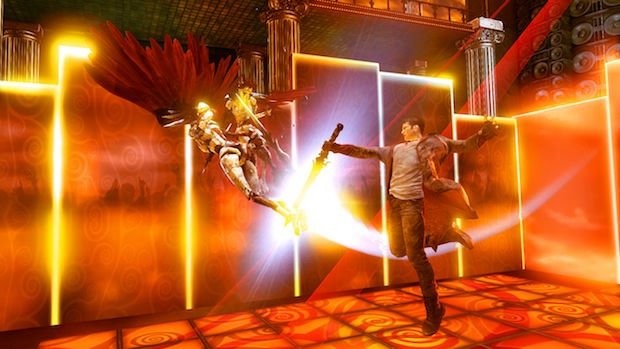 We’ve all seen the art style, and while it seems to have polarized the nation, I’m a fan of it. Few games are as richly colorful as this, especially in the hardcore action genre, and the nightclub level is especially notable for featuring all manner of golds, yellows, reds, and blues. This is a beautiful looking game, and while many will grieve over the thirty frames per second issue, I can’t say it bothers me much at all. Those upset by it may have a legitimate complaint, but I don’t think it’s done much to challenge the overall fun of the game at all.

A sense of visual and aural flare drenches everything as the world constantly shifts and reality is ignored in favor of providing something incredibly memorable. Instantly, a nightclub based very closely on a real-life one in Europe can shatter and contract to become a demonic arena, then explode into a glitzy game show universe of colorful walkways and talking glitterballs. One level alone featured all this and more, constantly expanding and shrinking to create something that looked and felt like a twisted ghost train ride. Albeit, a ride in which you get to cut stuff to pieces almost all of the time.

As for Dante himself? Well, I like him. He started the demo trying to get into the club, only to be told by the bouncer he wasn’t on the list. So, he smiles, casually knocks the bouncer out with a lazy punch, and calmly writes “Fuck you” on the clipboard of names. He’s more hotheaded and cocky than before, but he’s no less ridiculous in his badassery. Again, the rest of the game could feature him weeping softly while listening to My Bloody Valentine, but I see no evidence of that here, and only clues from Ninja Theory that he will grow more and more “Dante-like” as the game progresses.

So, that’s where I am with with DmC right now. As with Silent Hill: Book of Memories, I won’t waste my time talking to people who arbitrarily decided to hate the game the moment it was revealed. All I know is that I watched it, I played it, and so far I enjoyed it. That’s good enough to keep me looking forward to the full package.