The Hitman series is finally back. Agent 47 is ready to kill again for the right price and he has some new abilities to aid him in his murderous ways in Hitman Absolution. As IO Interactive showed us in the world premier of the game though, Agent 47 is having a bit of trouble with the law.

The hands-off presentation saw the anti-hero in an abandoned library somewhere in Chicago. The place was crawling with cops as there’s a statewide manhunt FOR Agent 47 and the best of all, you start off with no weapons or tools to aid you.

Cops are patrolling the abandoned building, but as this is a library there are plenty of shelves and objects for Agent 47 to hide behind while he makes his way through the place. The first few minutes saw the player silently creeping around as the cops where calling to each other or making small talk with one another. IO stated that the AI is a lot more complex and intelligent this time as well as featuring a lot more human emotions.

While 47 has no weapons, he does have the new ability called “Instinct.” Activating “Instinct” gives you an X-ray view of the entire place that highlights all the cops as they patrol the area. “Instinct” can also show you the path a particular person is taking (represented by a walkway made of fire). The ability goes as far as letting you even hear the thoughts of people that are paying particular attention to 47. The new ability reminded me a lot of Batman: Arkham Asylum’s “Detective Mode.” 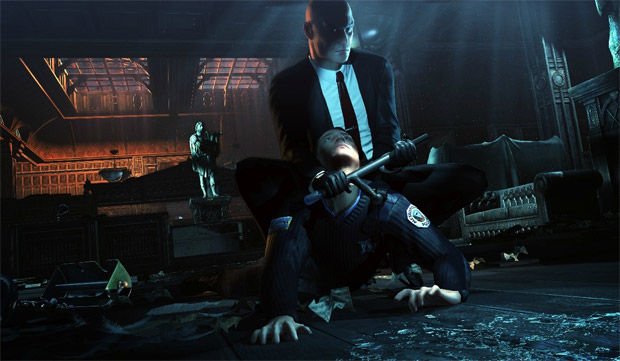 After a few more minutes of the Metal Gear Solid-like creeping, 47 started to silently take cops out one-by-one. At first with his bare hands and slowly building up from there with wire and a police baton that he used to snap necks. My favorite of the takedowns was when 47 grabbed a statue of a head, smashed it into a cops face and the force of the impact pushed the cop through a hole in the floor to a level below.

Eventually 47 can’t make his way out without being seen so he grabs a gun from the corpse of a cop and uses an officer as a human shield. 47 is slowly backing out of the place as several other cops have guns pointed at the player. Once far enough, 47 snapped the hostage’s neck and made his way upstairs to make his escape, but not before shooting a chandelier from its chain to slow down the perusing cops below.

Once on the roof, the player is greeted by a police helicopter which follows 47 as he went into the closest building for cover. The chopper shortly opens up fire and 47 is rolling and jumping from cover-to-cover to get out of the room safely. This room is home to dozens of caged pigeons so lots of feathers are flying all over the place.

Towards the end of the room the chopper stops firing and instructs a nearby officer that 47 is in the building. The cop investigates only to be taken from behind and 47 uses the chance to put on the cop’s uniform and calmly walks outside to another building as the helicopter simply watches on none the wiser.

Once inside the new building you see that you’re in a pot den where a few pot heads are freaking out that the police have found their place of “business.” One of the guys freaks out so much that he tries to cram a potted Weed plant down the toilet to get rid of the evidence.

As 47 makes his way through the room, a guy tripped out on weed offers 47 a hit from his bong before a couple of cops come in and question who 47 is. 47 answers by grabbing the bong and smashing it into the cop’s face and taking down the other in quick succession. Okay, I lied. THIS was my favorite takedown. 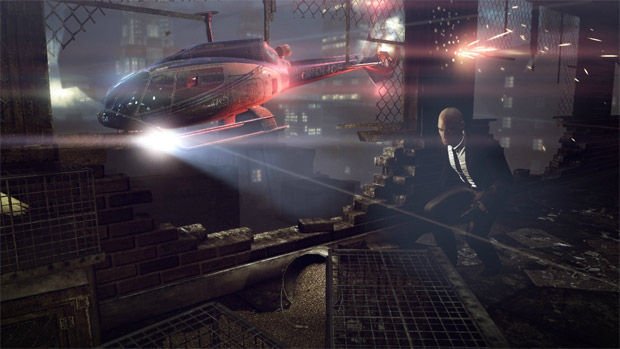 47 then makes his way towards the buildings elevator as cops are knocking on every door trying to find you. You’re still in the police outfit so no one pays much attention to you except for one guy just before leaving the building. The cop believes you’re an old retried cop to which 47 replies by saying “I never left.” 47 then makes his way outside and disappears amongst the crowd of people.

Even in the pre-alpha state, Hitman Absolution was looking simply gorgeous. There was a lot of attention to detail and I really liked the lighting effects. Since there was no hands-on I can’t comment on the controls or much else, but I at least can tell you it was looking really good.

IO Interactive did promise a lot though and stated at the beginning of their presentation that there will be a lot more freedom of choice that will be “very key” to the experience. Disguises and impersonations have been “taken to a new level” and will also be a key feature.