Let’s make something clear right from the start: The MEK-FU controller is a USB-based, fully programmable controller. You’ll be able to use it beyond just Hawken.

The controller is designed by RIPLEIGH, a new accessory company that’s giving the accessory market a spin. Chen Yisheng, CEO of RIPLEIGH, was at the party and told me the team did a lot of research in order to design the MEK-FU. They even have someone on the team that drove tanks for the military.

The controller features two joysticks, numerous buttons, flip switches, and everything else you’d think would be necessary to control a giant beast of a mech. How many buttons, exactly? The funny thing is that Chen Yisheng wasn’t even sure, but there’s a lot. Hell, there’s even a full keyboard on the controller!

Another amazing feature of the MEK-FU is that you can attach your mobile or tablet device straight onto the controller. This is to serve as a secondary screen, or even as the main screen, which will work with Hawken thanks to the Gaiki streaming partnership. 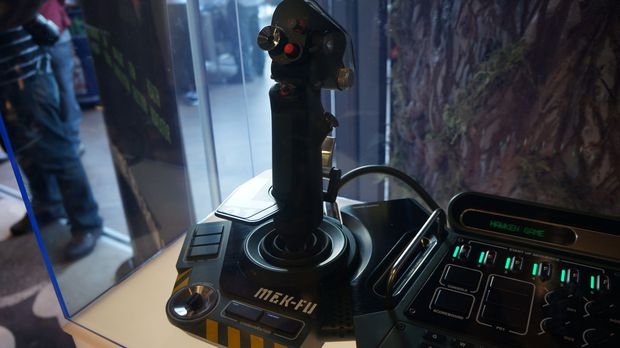 Everything you’re seeing here is in prototype form, but it’s pretty close to what they imagine the final design will be like. RIPLEIGH is still playing around with some ideas, one in particular that Chen told me was that they’re thinking about making one of the joysticks useable as a standalone device. I strongly encouraged Chen that would be a great idea.

The MEK-FU will be out early next year, hopefully very soon after the release of Hawken this December 12. Before leaving the Hawken event, Chen asked me how much I would want to pay for the controller. I told him if they were to include the standalone joystick idea, I’d pay in the $150 range. How much would you be willing to pay?