Recently, Zen Studios revealed that they were broadening their horizons from the pinball games they’re best known for. One of their new projects, Kick Beat, is a rhythm/music title with a martial arts theme planned for release later this year. The reaction was muted, at best, and I have to admit to a certain measure of reticence toward the title myself.

Having had the chance to play it now, I came away pleasantly surprised by Zen’s new adventure.

Kick Beat is a simple game. Enemies move in a circle around the player, eventually stepping in to engage, at which point the player must strike them or receive damage. To succeed, all one has to do is press the face button corresponding with the enemy’s position on the circle, which simply keeps to the four basic directions of up, down, left and right. A successful strike results in eliminating the enemy, scoring points and building a combo while missing the beat clears that score combo and may cost a bit of health. 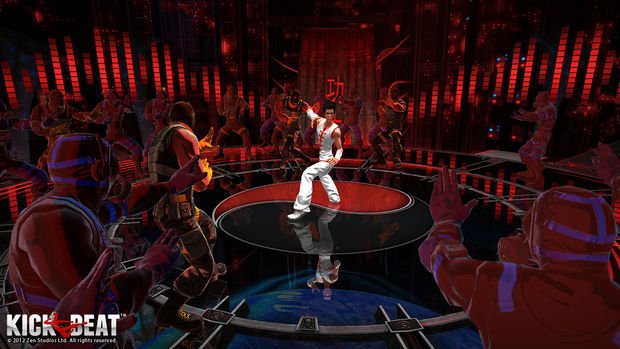 When you’re playing well, the scene you’re watching becomes akin to a dance routine, as the character executes a wide variety of flips, rolls and kicks to dispatch foes. The hand-drawn animation really stands out in this regard and I found myself getting absorbed by the hypnotic flow of the figures moving in and out of the combat area.

Some enemies have icons floating over their heads as they move in. These can include score multipliers, a shield to protect you from damage and bonus points. You collect them by making a second attack on these specific foes, adding another level of complexity to the affair.

The guys at Zen made it look easy, but it took me a few rounds to start to get the feel of it. Kick Beat is designed with a range of difficulty settings which should make the game accessible for skilled and casual players alike. At its easiest, the enemies will move into a circle bearing the symbol of the button the player is to press next, which then glows at the appropriate moment. On harder levels, that circle is replaced by merely outlining incoming enemies or is absent altogether and collecting bonus icons becomes mandatory. At the most extreme setting, the entire sequence is randomized to ensure that your skill at the game — not memorization — is tested. 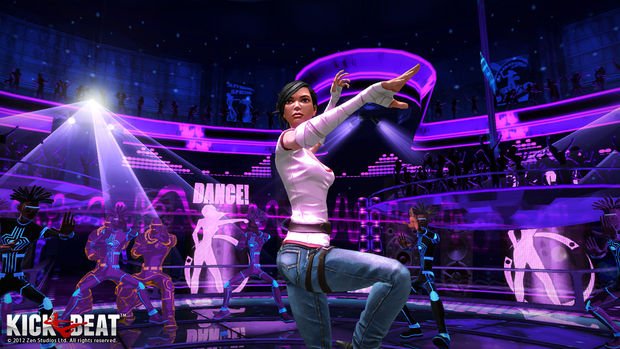 Kick Beat comes with 18 licensed songs to play through, tracks Zen refers to as, “music suitable for combat.” Some of the music comes from major label artists, including Marilyn Manson and Pendulum, but the majority are from indie artists that the development team were fans of and sought to get involved in the project. Players won’t be limited to just these tracks, as Kick Beat will also include a beat analyzer which will allow you to import your own music and have stages generated from them.

It looked a bit goofy from the first trailer shown and I suppose it probably is, but I rather like Kick Beat. It has a lot of energy and it’s just fun to play. I found some of the prompts on the easiest setting to be a bit distracting, possibly more trouble than they’re worth, but kicking missiles out of the sky to the beat of Rob Zombie’s “Scum of the Earth” has tremendous appeal for me and I’m interested in checking out what the game’s two-player competitive mode looks like. Right now, I’m optimistic that Kick Beat will be a fun experience on a few different levels and worth looking into when it releases later this year.