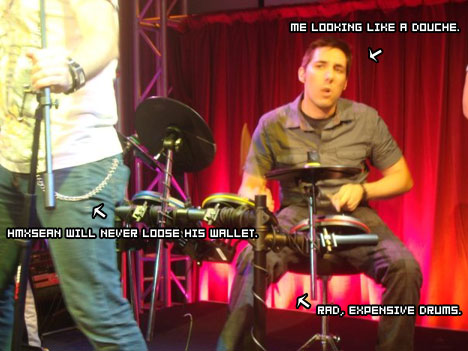 At first glance, the new peripherals that will ship alongside Rock Band 2 don’t look particularly remarkable. The guitar’s a new, sexy color, and some slight aesthetic tweaks have been made to the drums.  So what’s the big deal?

As Harmonix puts it, it’s all about “innovation” and “perfection.” And while one could argue that when it comes to the core peripherals for Rock Band 2 they’re soft on innovation, they’re certainly making some nice steps towards perfection. Mostly happy with their original designs, Harmonix is sticking with their working formula, instead focusing on known peripheral issues and player complaints.

I had a chance to get some hands-on time with the peripherals a few times at last week’s E3. So is there a big deal? Hit the jump to find out.

Starting with the guitar, Harmonix has kept the original Fender Stratocaster shape, but have changed the color scheme, giving it a wood-like finish. Additionally, all guitars will be wireless out of the box, a design choice (for Xbox 360 users, at least) should have been made when the first game was released.

The feel of the guitar has changed a bit, as well. The buttons are noticeably less “clicky” and much quieter than the original guitar; they definitely have a better feel than the original design, making it easier to hammer-on and pull-off notes. Complaints about the “mushy” feeling of the strum bar were also apparently heard, because Harmonix claim that the feel has changed. In all honesty, I didn’t notice this change the few times I rocked the guitar; it still felt “soft,” which means less noise, but I’ve always preferred the reassuring click of competing products. The strum bar did feel sturdier, however.

There’s also a curious, yet innovative, new feature built into the guitar — an auto-calibrator camera and microphone. Exactly what it sounds like, there’s a small microphone and camera built in to the guitar itself. Simply navigate to the in-game calibrate menu and point the microphone and guitar at the screen. Once calibrated, a big skull will appear on the screen to let you know the deed is done (“Don’t worry, it’s not scary,” promises Harmonix’s John Drake). Certainly an interesting feature, and should come in helpful for players who might find they transfer consoles (or hard drives) from one location to another on a frequent basis.

Harmonix also have a few tricks up their sleeves for the drums, as well. The new drums that ship with the band kit look nearly identical to the old set, save for a few new aesthetic changes; a “newb” would be hard pressed to see a difference at first glance. The pads are now velocity sensitive, and are also slightly quieter when hit, but still sound significantly louder than drum heads covered with the after-market sound-dampening pads. The kits bass pedal is now metal reinforced because American’s are fat stompers, but generally feels the same. Oh yeah, and it’s wireless now, too.

The drum kit is also expandable, according to Harmonix. New parts on the back of the kit will allow you to snap on raised cymbals which can be used in place of the pads if you wish. The game will recognize the additions to the kit, as well, and offer added value during the game’s fill sections — when a fill is played, the pads will be toms instead of cymbals. It’s also possible to add a second kick pedal to the kit, which brings us one step closer to seeing Slayer’s “Angel of Death” making its way into Rock Band.

During the “Rock Band Bash” at the Orpheum in Los Angeles last Wednesday night, I had a chance to hop on stage and rock the peripheral everyone is talking about — the high-end ION Drum Rocker drum kit that can be used with Rock Band. The $299.99 peripheral is solidly constructed full kit that can not only be used in-game, but with the help of an electronic drum brain (the demo was attached to an ALESIS DM5), can be played as a standalone drum kit.

While we didn’t see that particular hotness in action, it’s clear that $299.99 can go a long way for someone serious about trying to do their best John Bonham imitation.

Feel-wise, the drums are sturdy as hell, and a far cry from the already decent kit that ships with the game. The pads are solid and have good bounce, and the cymbals are thick and well-built. I rocked Billy Idol’s “White Wedding” in front of a sizeable crowd on stage at the Orpheum (Harmonix’s Sean Baptiste on vocals, Game Informer’s Ben Reeves on bass, and a pre-teen blonde rocker named Ben on guitar) and felt like a total rock star behind the full kit. It was responsive and certainly felt more substantial when my sticks hit their marks. I attempted to rock the raised high-hat in place of the yellow pad, but quickly switched back before long. The cymbal was responsive and was hitting all of my notes without much problem, but my nerves got the best of me (hundreds of people watching and all), so I switched back to what was familiar.

Overall, the ION Drum Rocker definitely feels like a three-hundred dollar peripheral, and I’m going to be spending a lot of time at my local blood and sperm bank in hopes of being able to afford one this September.

But if you already spent your hard-earned cash on the original Rock Band set, and can’t even begin to think about bringing more toy instruments into your house, do you really need all of this new crap? Nope — all of your old Rock Band peripherals will be compatible with Rock Band 2, so if you just want to buy the standalone disc, that’s your prerogative.

Still, Rock Band “hardcores” are probably going to want to reap the benefits of the upgrades, and should start thinking about who they’re going to pawn off their old instruments to now. Oh, and GameStop doesn’t buy back used Rock Band drum kits. Trust me — I checked.