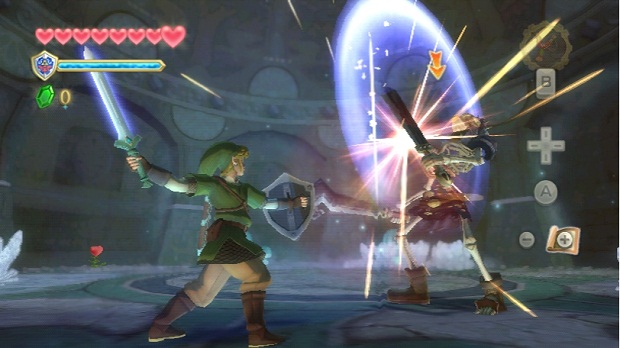 I was so hypnotized (LIKE A COBRA!) by the full orchestra playing Zelda music at the Nintendo press conference this morning, that I didn’t really get a chance to concentrate on all the new footage shown of The Legend of Zelda: Skyward Sword played during the show’s opening montage.

But I just got back from playing the game, and I have to say … oh, you aren’t getting my thoughts that easily. Keep reading!

Spoiler alert: THE GAME IS AWESOME!

On display in the Nintendo booth are three demo modes for The Legend of Zelda: Skyward Sword: Dungeon, Boss Fight, and Bird Racing. And, yes, you just read “Bird Racing.” YOU GET TO RACE ON THE TOP OF BIRDS IN THIS GAME!

I guess the best way to explain all this is to break it down by mode:

This is what you would expect from a Zelda game. Travel through a dungeon, collect keys, fight enemies, and solve puzzles! Nothing truly revolutionary. The real focus of the demo was on using some of the game’s items and fighting using your sword.

The items are very similar to past Zelda games, but all are controlled with the Wii Motion Plus controller (a must for this game). Everything felt very smooth — almost too smooth! The controls were so responsive, that I kept aiming all over the place. Not a huge negative, as I learned to adjust quickly, but controlling in this new Zelda takes some getting used to.

As for the puzzles, they were classic Zelda. And, honestly, much harder than puzzles I have experienced in the past … which I LOVED! One found me entering a room and having to trigger three eyeball switches on the wall,. To do this, Link had to be in the perfect spot in the room. Unfortunately, that spot was elevated a few feet above the ground.

Using one of the new items in the game (an awesome flying beetle!), Link had to cut a rope to release a create, which I then pushed to a specific spot. Once I stood on the crate and held my sword in a specific position (again, using the amazing 1:1 controls of the Wii Motion Plus), the door opened and I moved on.

It was a satisfying puzzle and I look forward to more like it in the final game.

This boss fight was not what I was expecting.

Most Zelda bosses fill the screen and require the use of one specific item found in the level to defeat them.

This boss, however, was a one on one duel between swords. The enemy character (who liked some kind of emo Zora), fought Link in a round arena. The trick to defeating him is to turn your sword in the right direction and strike.

And this is a major addition to Skyward Sword — and a huge focus! When fighting enemies in the game, Link has to strike at the correct angle to do any damage. No more button mashing or random flailing away! That won’t work in this game!

And you know what? I really like this addition. It made the game very challenging and each battle felt almost like a puzzle. This new battle system should help please the large group of people who have been complaining that the recent Zelda games have been too easy.

This is pretty self-explanatory.

During this sequence you fly on a bird, and … race.

BUT IT’S SO BEAUTIFUL!

Taking place outside of the Sky City featured in many of the game’s trailers and screenshots, Link mounts (hehehe) a giant red bird and races other villagers around a huge racetrack.

It’s pretty simple and controlled by tilting the Wii Motion Plus controller back and forth. Nothing really special abut this sequence, but it looks AMAZING (just wait until you see it in motion) and confirms that there will be some fun minigames featured throughout the game. For any Zelda fan, this is welcome news.

The Legend of Zelda: Skyward Sword is shaping up nicely — much more so than the build Nintendo showed last year. I walked away impressed and really ready to play some more.

Also … did I mention the game looks BEAUTIFUL?!

The wait until this game’s Holiday 2011 release is going to be a long one.