Awesomenauts — developed by Ronimo Games, the creator of the superb Sword and Soldiers — is a six-player team-based battle game combining elements from League of Legends, Monday Night Fights, and Worms. That is to say, IT IS AMAZING!

I wasn’t expecting to like this Xbox Live Arcade / PSN game as much I did, but read on to find out what won me over. 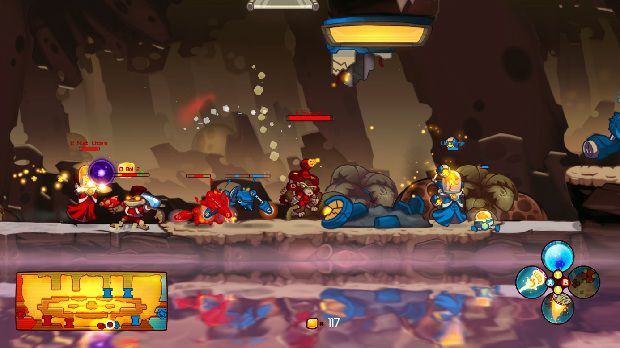 I mean, seriously. Look how beautiful this game is. Incorporating a very stylized, 2D look, Awesomenauts is colorful, highly polished, and displays beautiful animations for all the many characters in the game. It really is a sight to behold and one of the best looking downloadable games I have seen in a long time. 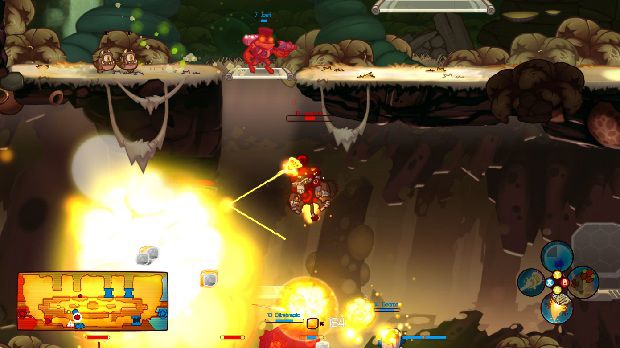 For the demo I got to play at E3, there were three playable characters, but the final build of the game (set to release in September 2011) will contain six different characters (with more coming as DLC!).

Each character is similar, but  possess certain abilities and weapons that set them apart. For example, the cowboy can throw giant sticks of dynamite that cause huge explosions, while the monkey can fly (naturally!), making traversing the gorgeous levels easier.

Choosing a character is important and will really affect how the game is played. 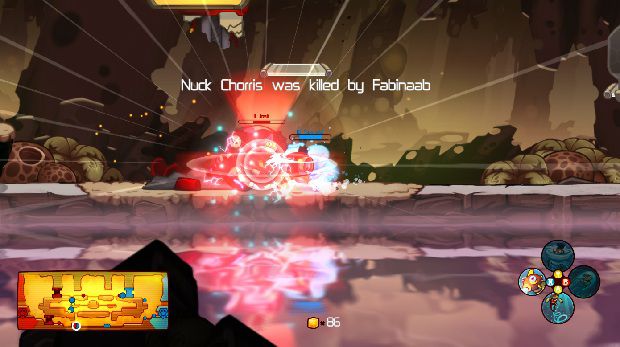 And, speaking of how the game is played, Awesomenauts finds two teams battling it out in a massive, multi-level arena, trying to destroy the other team’s bases.

Each team has three players each, with the computer controlling any players that are not joined locally or online. In addition to being able to directly control your selected character, armies of drones will also help you fight the enemy.

These drones are generated from turrets and structures that live on each side of the level. These turrets can also attack the enemy and are tough to defeat.

The combination of player-controlled mayhem with some aspects of tower defense really combine to form an addictive, strategic experience. 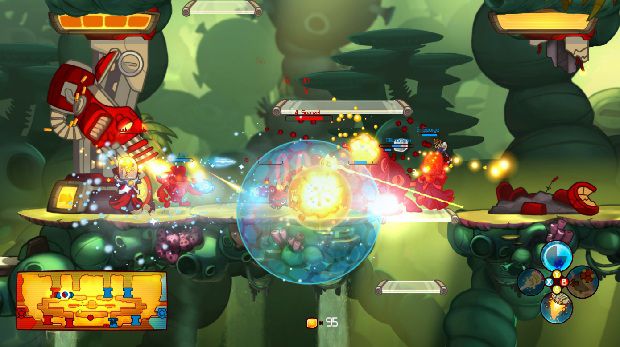 Currency can be collected throughout the level (in the form of glowing cubes) and used to buy upgrades for each character. This part is awesome and extremely fun.

The upgrades range from more health to massive new, powerful weapons that will help you defeat the enemy much quicker.

In a fun twist, when you are killed in battle, you are dropped down from the top of the screen again inside a rocket ship (while your opponent continues to play). While falling, you can collect a bunch of cubes to raise your currency amount, which you can then use to buy upgrades.

So, even though your opponent will have time to attack you after you die, the chance to make some money to make you stronger is a nice, fair trade-off. 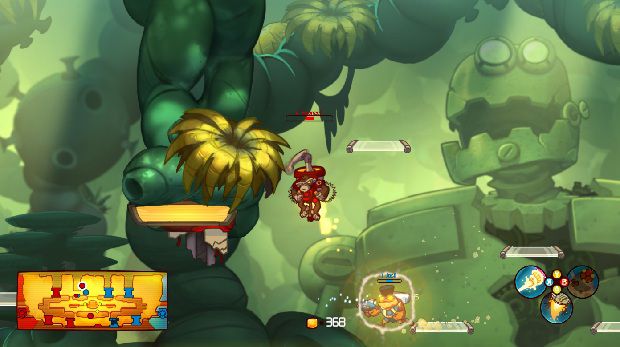 I really loved Awesomeanuts and can’t wait to play more when it is released for XBLA and PSN in a few months.

The game is super addictive, and, with the promise of chaotic six-player online action, looks to be a great time. It plays great and looks even better! Nice job, Ronimo Games. You seem to have a hit on your hands.