[Update: Nintendo has since clarified a few of the Wii U details, including the tablet’s battery, that were unclear at press time; check out the hardware information here.]

The rumors of Nintendo’s new console were true, including the crazy talk about its wild tablet-like controller. Way to keep that one under wraps, Big N.

It’s called the Wii U, and while Nintendo’s being tight-lipped about a lot of the specifics, it did let me get hands-on with the controller across a few nifty tech demos for the upcoming console.

How does it feel? 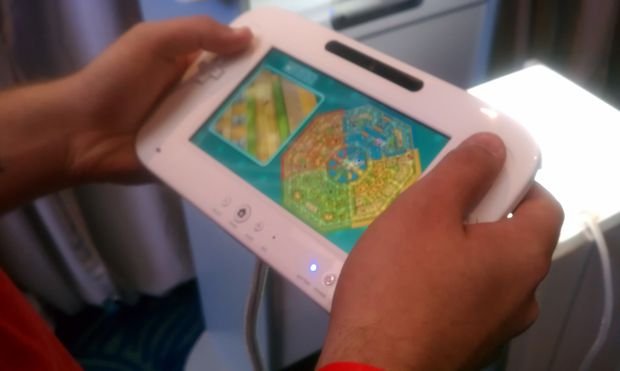 First off, the thing is as big as it looks in pictures. That is to say, it’s simply massive. While Nintendo hasn’t released the official specs, we do know that the screen is 6.2 inches wide, which is smaller than an iPad but noticeably larger than the screen on the PS Vita. Add an inch or so to either side of it, and you get a good idea of how far apart your hands will be while playing.

With that said, it’s shaped in such a way that gripping it doesn’t feel as uncomfortable as it looks. If anyone is used to gaming with an iPad (in experiences where you have to hold the device horizontally, in “landscape” mode), you’ll feel right at home. Your fingers fall firmly into place onto the right and left triggers, and it’s easy to quickly move your fingers to the left and right “bumpers,” respectively.

Despite the large size of the controller, the buttons on the front — including the D-pad and the two analog pads — are surprisingly small. While they’re not tiny to the point of being uncomfortable, the analog pads are short and close to the controller itself. They range of motion on them didn’t feel quite as wide as the analog sticks on the Nunchuk or traditional controllers, either. While I only played a few games that made use of them, I did find my fingers slipping off more easily than I would have like when moving a character around in a 3D space.

6.2 inches is big, but size is only half the story. I’m happy to report that the massive screen is vibrant, and was easily able to push what appeared to be high-definition visuals. (Nintendo’s not yet willing to share what the resolution is, so the term “high-definition” is used lightly here.) What I can say is that I didn’t notice any loss in fidelity when looking at Nintendo’s Legend of Zelda tech demo (which they’re calling the “HD Experience”) on the controller versus the high-definition televisions they had set up. 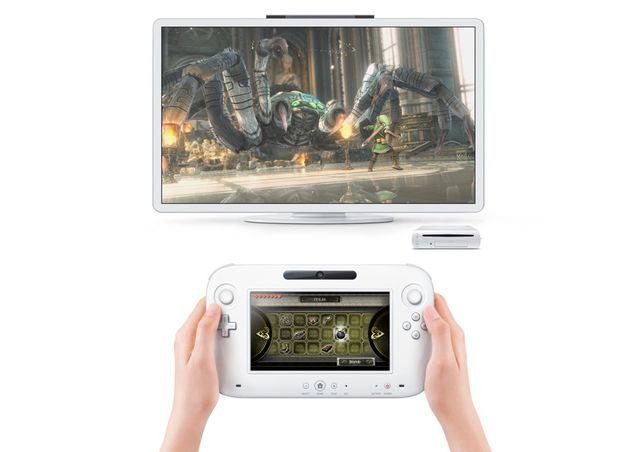 What else is on this thing?

Nintendo was pretty forthcoming with top-level details like the fact that it would have a variety of buttons, a touch screen, and such. But I also noticed a headphone jack on the top of the unit, which will come in handy when trying to play Super Mario Bros. while your significant other is trying to watch Grey’s Anatomy.

I also noticed an AC adapter plug on the controller. Is it rechargeable? Nintendo won’t say.

On the bottom was a big port that looked like it could be an HDMI-out jack. Is it? Here it comes: Nintendo wouldn’t tell me. But consider the possibilities if it is — take your game to another TV by moving just the Wii U controller and outputting your game to a big screen.

Right now, Nintendo’s only ready to speak about high-level concepts, about the “experience” and possibilities of the system and its unique controller. Based just on that, it’s difficult for me not to be impressed. Yet I’m not entirely sold on wanting to use this controller, with its bulk and smaller analog sticks, versus a more traditional controller. But if third parties can find ways to utilize the screen in interesting ways, it may be hard to resist.