Next up in my series to preview all five of the games within Nintendo Land for the Wii U is Luigi’s Ghost Mansion. (Check out The Legend of Zelda: Battle Quest right here!)

With Luigi’s Ghost Mansion, Nintendo Land is bringing a very Pac-Man Vs. vibe to the Wii U. To anyone that remembers Pac-Man Vs. for the GameCube, the game was odd, but fun — a five-player multiplayer extravaganza that was actually quite entertaining in practice … despite the ridiculous amount of cords involved in the process.

Is Luigi’s Ghost Mansion just as fun? The first bit of good news: there are no cords to deal with! 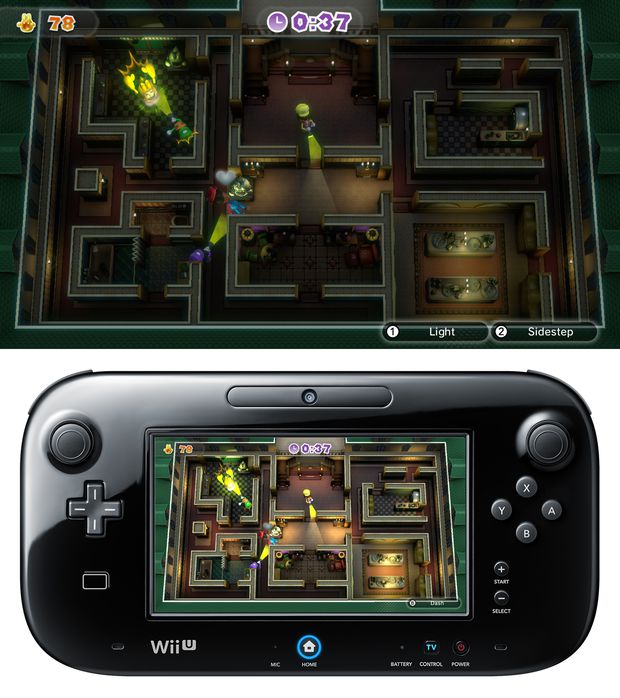 The twist: The ghost is invisible on the main T.V. screen. The ghost can only be seen on the GamePad screen, which the ghost player uses to control.

The object of the game is for the four players to survive for five minutes, or destroy the ghost using their flashlights. The ghost has an opposite, and very nefarious, goal: TO KILL THE FOUR PLAYERS BEFORE TIME RUNS OUT! Well, technically, the players just “faint” when attacked by the ghost … but we really know what is happening.

The ghost only has to touch a player to make him faint, but it is not as easy as it sounds. In fact, the game felt surprisingly balanced. I played the demo so many times, and felt the players and ghosts won equally, which is a really good sign.

When a ghost is close, the players controlling with the Wiimotes turned to their side will feel their controllers rumble. The closer it gets, the more intense the rumbling becomes. This is how they know the ghost is around. During the demos, we would yell out “He’s by me! Yellow!” while playing to let everyone know where the ghost was. It was a fun bit of interaction.

When the ghost is hit by the flashlight, its energy is drained from 100. When it hits zero, the players win! If a player is knocked down, though, they can be revived if another player (or players!) revives them with a flashlight. It is a slow process, but that just adds to the tension.

As mentioned before, the ghost just has to touch the player once to make him/her faint. In a nice touch of detail, the ghost has to drag the player for just a few seconds before he officially faints. This is important, as in that brief period of time, another player can hit the ghost with a flashlight and the ghost will drop the captured player. There were some exciting last minute saves during some of my play-throughs that had everyone screaming and laughing in relief. 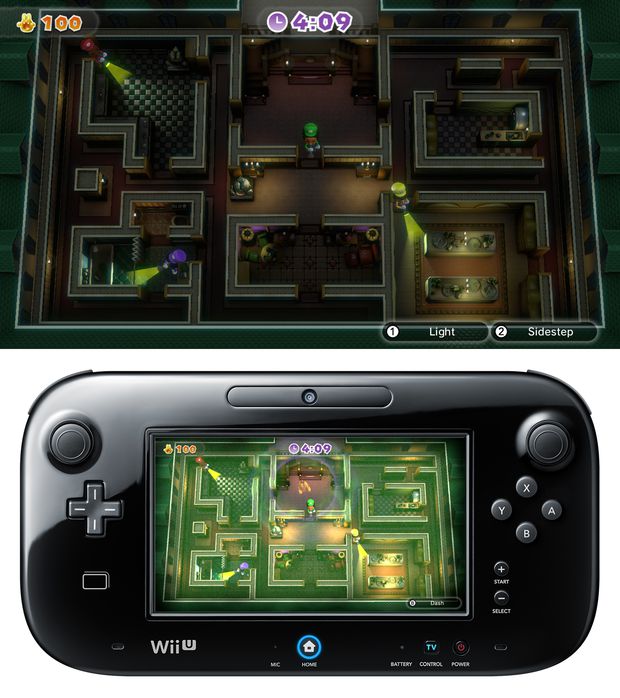 And that’s what is so great about Luigi’s Ghost Mansion: Everyone was having a great time. Nintendo’s E3 2012 theme of “together” is never more prominent than when playing this game. Every person I played the demo with loved it and had a really great time. We all screamed when the ghost would pop out. We all would cheer if we emerged victorious and defeated the ghost (not an easy task).

It was a truly fun experience and one of my favorite on the show floor.

If all the other minigames are as entertaining as Luigi’s Ghost Mansion, Nintendo Land is going to be something pretty special.