Square Enix is taking us back to the world of Final Fantasy XIII. Lightning is back rocking a new outfit and, well, that’s all we really know of the story so far. Something bad is happening. Probably.

Story aside, Final Fantasy XIII-2 features a some new heroes and a number of new gameplay features when it comes to the combat mechanic. One of the new features will make you think of Pokemon, in fact.

The demo Square Enix set us up on started near the beginning of your adventure in Final Fantasy XIII-2. Lightning from the last game is narrating all cryptic-like and talks about her sister, Serah, who comes hurling out of a teleporter just as Lightning finishes up her speech. Along with Serah is another new comer by the name of Noel and a Moogle nicknamed Mog.

The trio have arrived in Cocoon, an area that was actually referred to XIII. You can expect to explore a number of locations that were referenced or have direct connection to the last game. The trio don’t have much time to sight-see though as a giant hand seemingly comes out of nowhere and attacks our heroes.

The hand belongs to a giant monster named Atlas and is the only thing visible as the hand is the only part of Atlas that has made its way through a dimensional portal. There is a body present too, but it is completely transparent at this point in the game. 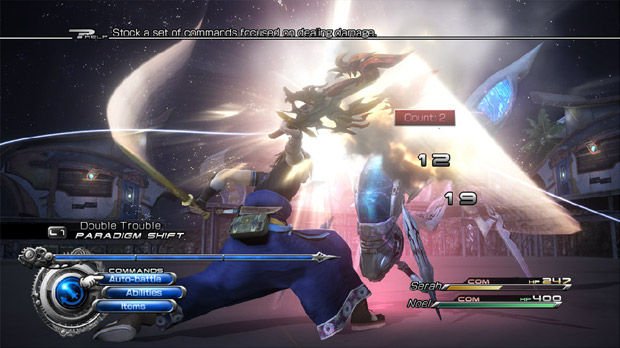 The combat mechanic of XIII-2 have received a number of changes, the first being the “Cinematic Action Sequences” feature and are basically quick-time events that occur during battles. The QTEs happened based on how far down Atlas’s health went with the first QTE being a simple quick flick to the left on the joystick to avoid Atlas’s giant fist smashing down into the ground. Some other QTEs I witnessed were the rapid tapping of a button or a quick hit of a button as they appeared on the screen. Nailing the QTE will see you succeed with completing a critical hit. Failing the QTE will simply see you take more damage or your attack not causing as much damage.

Another new change to the combat was the use of elemental effects. I didn’t actually do anything that would take advantage of this, but using spells that sync up with what’s going on in the environment (such as rain) will increase your attack’s strength.

Towards the end of the fight, three air ships came in and provide backup to Noel and Serah and this concluded the first part of the demo. We’re then taken a little further into the demo where Noel and Serah have agreed to help an excavation team get rid of Atlas for good. No one knows how or why Atlas has appeared, but he’s causing destruction to the Bresha Ruins area and needs to be dealt yet.

The way towards Atlas was a pretty linear path. There were multiple routes at some junctures, but it all funneled you towards your end goal. Enemies become visible once you near them and this time you can gain the upper hand before jumping into the battlefield. 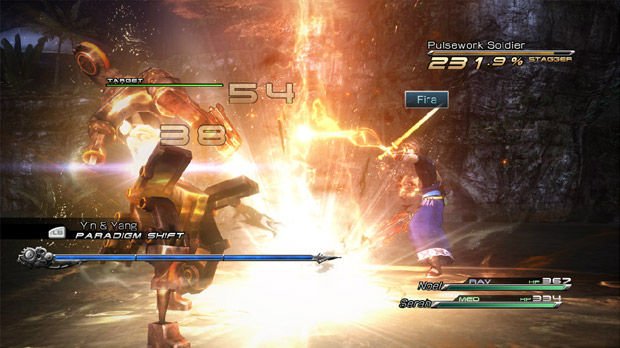 So this is where things start to turn into Pokemon. After defeating a monster, you might get a Monster Crystal item which represents the monster you just defeated and it will join your party. Two slots in your fighting party are reserved for the main characters in XIII-2 and the third is now reserved for a monster you’ve captured.

Every monster will have a different attack style (melee, magic, defensive, etc) and you can switch between monsters by doing a Paradigm Shift, which also changes up the main character’s attack styles. Monster creatures also have a power bar called the “Feral Meter” that allows the monster to unleash a strong special attack filled up by fighting.

Now this may change later in the game, but the Moogle wasn’t one of the monsters you can use in battles. Mog is actually around with Noel and Serah as you explore the the world and one thing he can help players with is finding artifacts scattered in the environment. You can spot an artifact by spying a transparent orb that Mog can make visible with his special powers. Once revealed, the Artifacts contain items for the heroes to use. He couldn’t do anything else, but I’m sure Mog will have more powers and abilities to make use of later in the game. KOPPA! 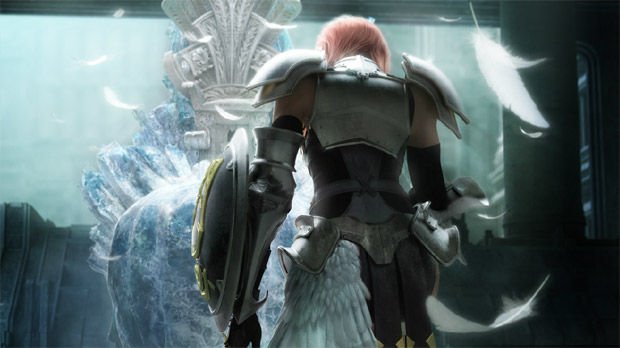 Once I was near Atlas, a “Live Trigger” event is, uh, triggered which revealed an item somewhere else on the map that can help you in the boss fight. This trigger gave me the choice to continue straight to Atlas (and get my ass handed to me) or go after this revealed item which will actually give me an advantage against the full form of Atlas. Before making my choice, I was given several responses to the situation where I could either consult Mog and Serah or just kick reason to the curb and attack Atlas head on. Characters will respond accordingly to your response and may give you hints or clues depending on what you choose.

For the most part, it seems that the “Live Trigger” events are about giving you an advantage against a boss fight more than anything else. You could easily bypass what gets revealed to you but it just means the fight will take longer, if not outright kill you like what I witnessed before my hands-on. Plus there’s more dialogue and cinematics to see if you enjoy that sort of thing.

I decided to go for the special item and once I neared it, I was transported to a “Time Labyrinth” where I had to solve a series of puzzles to reach my objective. In this particular set of puzzles, I had to collect a number of orbs on a tile pathway that disappeared as soon as I stepped off them. Once solved, I was transported back to the room and triggered the “killing Atlas easier thing” device as I liked to call it. Which I then did. I killed him. It was really easy.

I’m sure you’ve got questions. Like, can you level up the monsters, what’s going on with the overall story and what’s up with Lightning’s new snazzy outfit? Believe me, I asked but Square Enix wasn’t ready to chat about exact specifics just yet. I’m just as curious as you to see what they’re doing to fix a lot of the problems and complaints people had with Final Fantasy XIII on top of the newly revealed features.