Right off the bat, I need to say this — Dead Island is not the bad game I feared it would be. I went into the hands-on demo worrying that, after all the hype, Techland’s open-world zombie holiday would be too rough to enjoy. However, while there is indeed a roughness to it, the enjoyment factor is firmly in place.

I just wish I didn’t spend so much time kicking zombies in the crotch so I could have appreciated it more.

Damn, I love kicking zombies in the crotch. 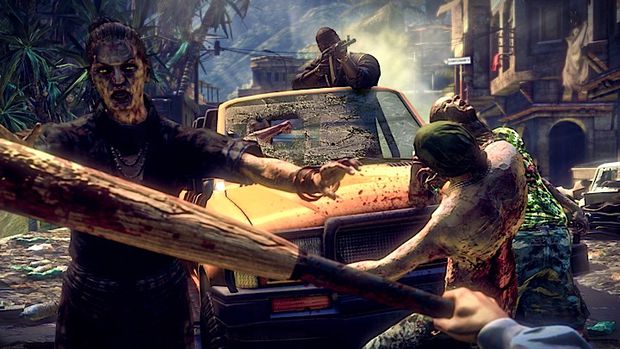 Many outlets will describe Dead Island as “Borderlands with zombies” and one cannot deny the very blatant influences. There are four characters, each with their own specialties and unique rage attacks that can be activated after a meter is full. My character specialized in thrown weapons and was able to enter black-and-white trances where knives are thrown rapidly and insta-kill the zombie hordes.

Like all good co-op, the multiplayer is of the drop-in/drop-out variety and anybody can rock any character they want, even if all four players wish to be the exact same person. At the moment, there’s no visible character customization, so it may be odd to see four identical twins roaming around. Each character has its own set of skill trees, which provide the biggest visual similarity to Borderlands, as there are three columns with a different set of specializations.

The demo starts out in a church, where many of the survivors are holding up. Here, you can purchase and upgrade weapons. I bought several throwing knives and then upgraded them to attach C4. Yes, I was able to throw exploding knives, and yes, it was everything I could have dreamed of.

There are a variety of weapons, categorized by their rarity. Some of them, such as an electrified double-edged blade, need players to be at high levels before they be wielded. You can carry a huge amount of items, but you can only equip nine for quick-use. I rolled out of the Church rocking a rifle, a cleaver, a bunch of knives, a sickle, a baseball bat, an iron bar and a mace … among others too sundry to name. 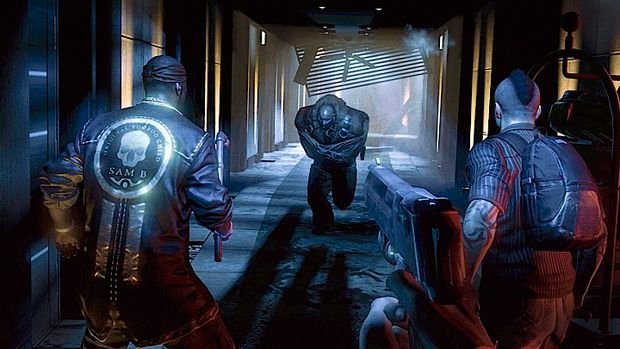 We accepted a quest, which placed a bold white line on the mini-map, showing the best route. Not thinking straight, I ran ahead and was told that sticking together would be essential. I soon found out why.

The most striking thing I’ve taken away from Dead Island is the fact that the zombies are some of the most individually threatening undead I’ve seen in a long time. Usually, five zombies in a game would be no big deal. In Dead Island, they are a very credible threat, and this is in a game with four human allies.

A big part of this is the fact that Dead Island is very melee-based. Yes, there are guns, but they run out of ammo quickly. The zombies are also incredibly aggressive, and are often smart enough to wield weapons themselves. Add to this the unique creatures as as Rams (huge, straitjacketed opponents that charge into enemies) or Thugs (tall, muscular zombies that can knock players to the ground in one punch), and you have a pleasantly challenging game, even for four players.

The game’s unique challenge and tough zombies helps distance Dead Island from Left 4 Dead. With a single zombie opponent, it can take two players simultaneously hacking away to chop it down to size. Procedural damage is in full effect, so you can hack off a leg or an arm, or go straight for a decapitation. The level of damage you can do a zombie’s body is beautifully grotesque.

Players can share equipment and have the ability to revive allies with medkits. If you die, you’ll respawn with a loss of cash and XP. You can expect to die frequently if you don’t work together, and remain aware of your surroundings. I quickly found out that propane tanks have a huge range when they explode and are capable of decimating a team. 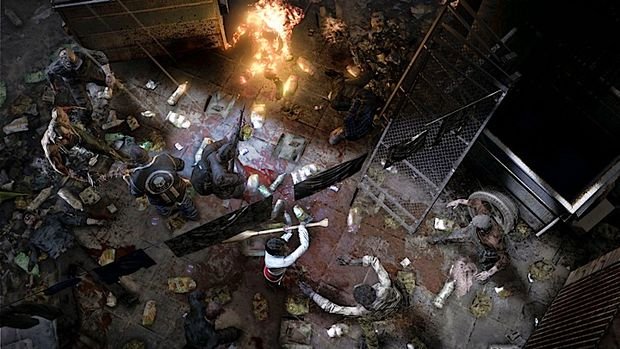 Our mission involved putting up posters to help find a missing girl. During the demo, I made sure to point out that putting up “Missing” posters on an island full of missing or dead people was a bit redundant, but I suppose the job pays well enough, so it’s worth doing. This quest provided a nice tour of the island, where loot chests, and shopkeepers, and innocent victims still fighting off the zombies could be found. Different areas of the island are shown as whirlpools on the map, and heading toward them will load a fresh part of the map.

Yet still, all these details pale in comparison to the fact that you can repeatedly kick a dead zombie in the nuts and laugh, laugh, laugh. The decapitations and the exploding knives and the electrocutions never get old, and provide a grotesque sense of fun in a world that’s actually quite threatening and grisly.

Dead Island is not the emotional heart-tugger that its trailers may suggest. It is, however, a game that makes zombies threatening again, while still balancing out the challenge with plenty of opportunity to mutilate and explode in the name of righteous human justice.

You will definitely want to keep your eyes on Dead Island.