Nick Chester has already provided you with a pretty good idea of what 505 Games’ Backbreaker: Vengeance has to offer. But I got to sit down with a bigger build of the game at E3 and thought I would share my thoughts. SPORTS!

Backbreaker: Vengeance is a football game that really isn’t about football. Instead, it is more of an action-y arcade game that finds players playing though three super quick, highly addictive football-themed modes to rack up as many points as possible to beat your friends’ high scores. Sure, you play as a football player, but each mode is more about dodging, jumping, and tackling your way to score as many points as possible.

As someone who hasn’t really played a football game since Tecmo Bowl on the original NES, I kind of fell in love with this upcoming Xbox Live Arcade game (no release date or price yet announced). 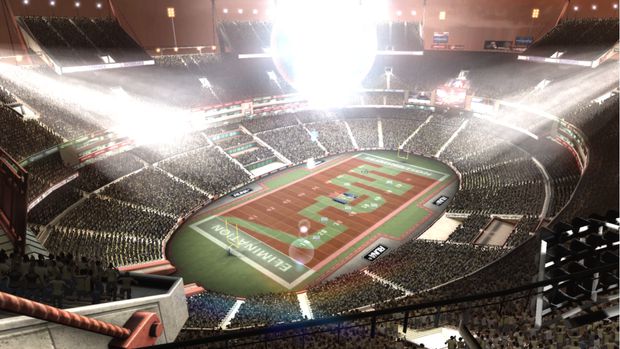 Here is a breakdown of Backbreaker: Vengeance‘s three modes:

In Tackle Alley, players must carry a football across the field and make it to the end zone. Sounds simple, but other players, obstacles, and “out-of-bound zones” stand in your way.

Using slick dodge moves with the right analog stick, players can spin, slide, and even leap out of the way of upcoming rivals. It is a simple system, but tough to master, as more and more opponents are added as the levels go on. 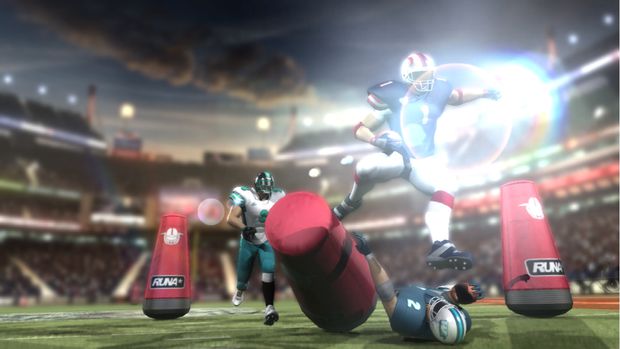 Vengeance is all about tackling. Which is awesome.

When the timer starts, players must just simply tackle all the other players on the screen. Again, a simple concept, but one made more difficult be slowly adding more opponents and scoring zones on the screen.

The “scoring zones” are exactly what they sound like. On the field are multiple illuminated areas that give you extra points by running over them. The tricky part is, they are placed in strategic places that, when obtained, will make it much trickier to reach your tackling goals in time.

It is a risk/reward system that really pays off and adds to the replayability of the game. 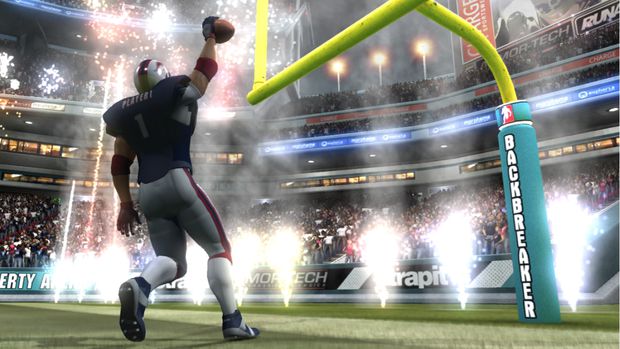 The oddest (but no less fun) mode in Backbreaker: Vengeance is called Supremacy. This mode is like a racing game with massive football players.

In Supremacy, you control a football player as he races three other football players around a “track” around the field. Along the way, there are turns, hurdles, and “out-of-bound zones” that must be avoided. In addition, players can shove the other opponents into the obstacles and knock them out of the competition.

As the rounds continue, players with the highest score are marked with a gold color. This “marked” player can be tackled or knocked out for even more bonus points. 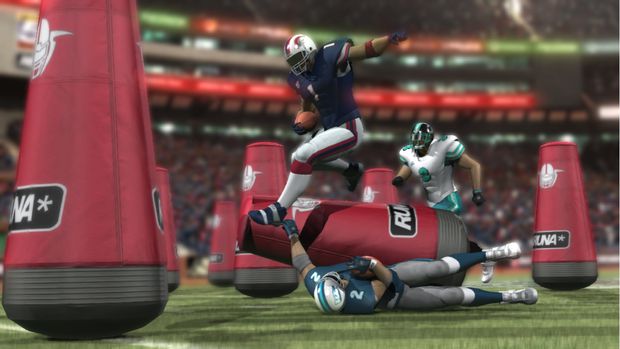 Backbreaker: Vengeance is not a football game at all. There are no teams, no quarters, no normal football rules at all, really. What it is is a fast-paced, addictive arcade game that requires players to just try to score as many points as possible in the different modes.

With over 320 levels (!), online multiplayer, and high score leaderboards, Backbreaker: Vengeance is shaping to be a must-have for any fan of super addictive pick-up-and-play arcade titles.

Heck, I even want it and I don’t know anything about sports!