For the past two months, I’ve been hearing good things about Guacamelee!, a colorful, luchador-themed Metroidvania game from DrinkBox Studios. Saying “Metroidvania” is usually good enough for me to be interested, but adding in wrestling moves that feel straight out of a brawler, a dual-world mechanic, and a playful art style made this something I had to see for myself.

Most of the buzz has centered around the PlayStation 3 version of Guacamelee!, but the game is also coming to the Vita. It’s pretty much identical to the console version, but that’s not necessarily a good thing.

The area DrinkBox presented was early in the game, essentially what is shown in the trailer above. It teaches the basics, introduces wrestling moves, and throws a few easy baddies for you to play with.

The luchador not only has the expected basic attacks, but also some dual-purpose special moves that allow him to burst through breakable walls both above and below. If enough damage is done to an enemy, pressing triangle will initiate a grab, allowing the player to hurl him away for a finish, preferably into another enemy.

Using jumps and special attacks to move around feels great, but sadly the combat has some issues. Enemies move very fluidly and like to punish any mistakes you make, such as whiffing with a punch and failing to stun the enemy. This wouldn’t be a problem, but the luchador’s reach was never quite what I expected it to be, so I repeatedly came up short. There were many times when I felt like the luchador was close enough for an attack and learned he needed to be even closer to actually connect. The special moves have much better range, but obviously there are many times when you want to use a basic attack. 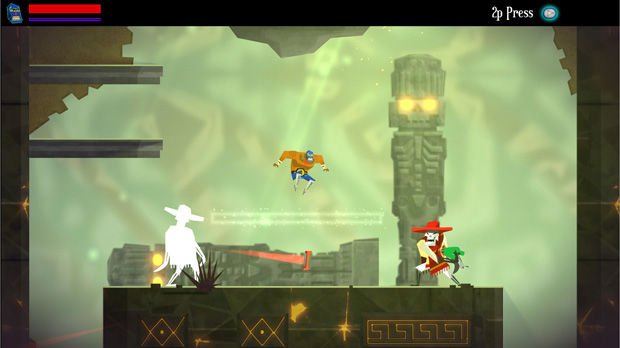 This is mostly a problem with shrinking the game down onto the Vita. Guacamelee! looks beautiful on the OLED screen, but the characters are quite small, meaning that making sure your attack connects is a little difficult. Similarly, the triangle button prompt for grabs is tiny, as is the text.

The developer noted that they were probably going to adjust these things, but I might actually prefer if they simply zoomed in a bit more instead of trying to replicate the entire screen of the PS3 version on a smaller screen. It doesn’t need to be as zoomed-in as Metroid II on the Game Boy since the Vita’s screen is pretty big, but it would be smart to give more consideration to the hardware.

Speaking of Metroid: Guacamelee! loves making homages to the series. One of the luchador’s abilities is to transform into a chicken with the press of a button. Besides just being silly, this feathered form helps him fit through small corridors, similar to Metroid‘s morph ball. One room contains a Chozo statue holding a power-up. An old man nearby even calls it a Chozo statue, which I was told was something that would be changed before release. 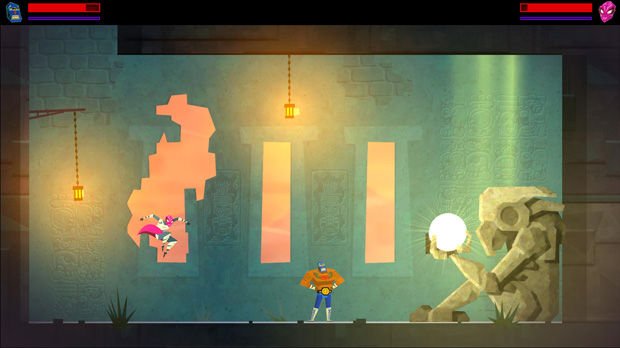 But hey, why not call a spade a spade? If you’re going to be influenced by a game, you might as well pick a good one. It may sound like Guacamelee! is just taking Samus Aran and dressing her up in a luchador mask, but the game has its own identity.

Besides adding moves normally found in a brawler, the luchador gains the ability to switch between the planes of the living and the dead. A wall may block a path in one world, but switching to the other world by hitting the shoulder buttons reveals a way through. Some enemies can only be attacked on one plane, but if you’re crafty, you can time a plane shift so that the invincible enemy is hit by another enemy you just threw.

Of course, the true test of a good Metroidvania is whether or not the world is as fun to explore when you’re backtracking with a shiny new trick. New abilities unlock new areas, but I wasn’t able to test this out during the demo, so I can’t say if the backtracking is fun or repetitive. However, based on the care being put into the rest of the game, I expect it should be fine.

Other than the small characters and interface, Guacamelee! is shaping up to be an entertaining platformer with lots of personality. I didn’t even get to try out the two-player co-op, but I already know that I’ll be picking it up when it releases later this year.