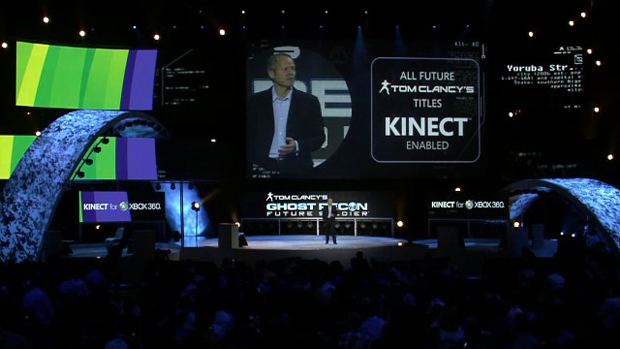 Looks like Mass Effect 3 isn’t the only “hardcore” title getting Kinect compatibility. Looks like in Ghost Recon: Future Soldier, you can customize every weapon in the game, including the internal components, with over 120 unique weapons available. You can use Kinect to operate the customization tools, using both voice controls and motion controls. Motion controls give you the feel of creating the gun yourself, while voice controls quickly get the job done. Shout out “randomize” and you can get a gun put together randomly. Shout out “optimize for long range”, and you’re gun switches to a mode best suited for killing from a distance, and so on.

You can also use Kinect pointer controls to aim and fire, which looks pretty fun, if not a tad bit insane. More details on that to come.

Also announced is the claim from Ubisoft that all future titles in the Tom Clancy series will be Kinect compatible.

Do you plan on integrating Kinect into your Tom Clancy experience, or do you plan on sticking with traditional controls?