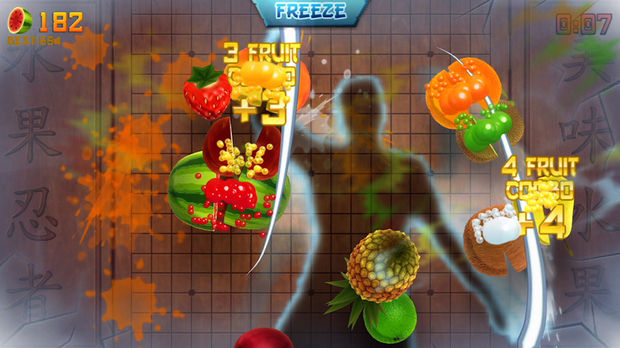 Halfbrick revealed that it will be bringing its popular Fruit Ninja title to Xbox Live Arcade this summer with Kinect support. It’s as tiring, but as awesome, as you might expect.

If you’ve played Fruit Ninja, you know the drill. Fruits are tossed on a screen and it’s your job, as a sword wielding fruit ninja, to slice ’em and dice ’em. On mobile platforms that’s generally been done with your fingers (or other body parts for those adventurous enough). With Kinect, it’s all about using your hands and arms. As the screen gets crowded with fruit, you’ll be swinging your hands wildly, and after a few quick sessions, I was starting the feel the burn.

That’s not necessarily a bad thing, though. While it’s a bit of a workout for sure, Fruit Ninja Kinect is surprisingly precise. In fact, it may be the most responsive Kinect game I’ve played to date, mirroring my actions one-to-one at a shocking smooth clip.

The game will feature the modes you’d expect from Fruit Ninja — Classic, Zen, and the fast-paced Arcade mode. But the addition of a two-player mode is probably the most inspired new feature. In it, two players stand side-by-side swiping at fruits on the screen, with one aiming for red-glowing fruits, the other for blue. Hit the other players fruits and you’ll lose points. Nail a special glowing fruit (up for grabs) and earn extra bonus points.

The timed game I played was neck-and-neck up until the end, with me and my open (Gamertag Radio’s Godfree) working ourselves into a frenzy as the clock counted down.

Fruit Ninja Kinect is set for release this year as part of Microsoft’s Summer of Arcade for 800 MS Points.