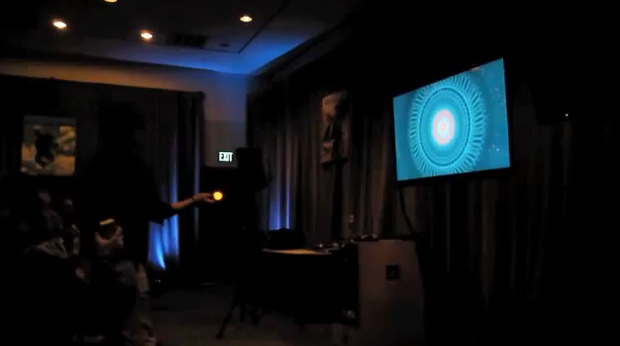 Sitting in a darkened theater room, Q-Games Dylan Cuthbert introduced the latest installment in the PixelJunk series with a curious statement: “It’s been a long experimental path,” he said. “It’s not really a game.”

We quickly see what he means. A squirming, vortex swirls in the center of the screen while strange electronic noises roar out of the speakers. A flick of the move controller and red lines fade in and out over the visuals. Soon beats begin dropping in. Music and visuals change in response to various motions. Down-strikes, up swings, side-to-side, twists, buttons. Everything seems to have some effect on the visual and audio experience of PixelJunk Lifelike.

“We’ve created an audio canvas with the Move controller,” Cuthbert explains. Four sets of sounds can be accessed with the four face buttons on the Move wand, with gestures to add sounds into the track and twists to tweak the currently selected sound. Players will be able to play live and have other users watch and listen to their performances over PlayStation Network. Additionally, two wands can be used to expand the experience, offering cooperative possibilities as well as simply broadening the range of control for a single person.

While what we were shown was mostly drum and bass work, there will be a wide variety of instruments supplied with the game along with a range of visualizations. No plans to allow users to upload their own samples, though such a feature may be implemented in future.

Also no confirmation yet on whether players will be able to save their tracks to the PS3 for later enjoyment but that is currently under consideration by Q-Games. Remixes of other player’s tracks, are out of the question, as Cuthbert says, “I believe everybody’s creation is their own.” And to round out the list of things we don’t know about it, pricing and release schedule are still being discussed with Sony.

The demonstration was interesting, but I’m not sure what to take away from it. After a few minutes, the audio at points just devolved into this utter cacophony with sounds indistinguishable from one another while the controller flailed about. Still, in a time when creative uses of the Move controller seem few and far between, PixelJunk Lifelike certainly stands apart.