“This is the true sequel to Aliens,” said Randy Pitchford as he excitedly pitched Aliens: Colonial Marines in his usual excitable way. “No offense to Alien 3, but that movie was more like a sequel to Alien — a single Alien, a ragtag group of people. Aliens is about this group of badasses and a whole ton of Xenos.”

Indeed, with the blessing of 20th Century FOX, the story of Aliens: Colonial Marines is to be adopted into canon — and that includes the Triceratops Alien! 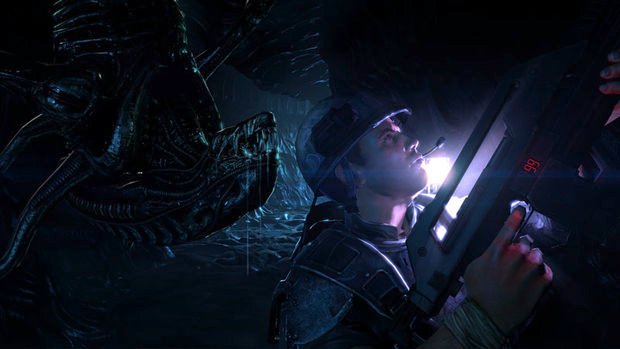 Colonial Marines kicks off with a squad of ultimate badasses crashing on Hadley’s Hope, the scene of the carnage witnessed in Aliens. Although the colony was devastated by an explosion at the end of the film, it still remains standing, albeit in a serious state of disrepair.

The game starts in a manner very similar to the movie. You and your squad explore the eerily quiet colony, noting the ruin around you. One Marine finds a door that has been ripped open, despite being several inches thick. Naturally, you go through that door. Then, of course, you find jars of Facehuggers, one of which is still alive and tries to rape you through the glass.

The authenticity is visible to any Aliens fan from a mile away. As the demo comes to the control room, we see the very table that Hudson used while the protagonists of Aliens were under siege and working out an exit strategy. We don’t have much time to take in the sights, however, because within moments, a Xenomorph makes its first appearance, bursting from an air vent and dragging a hapless Marine with him. You hear the victim’s screams echo through the vents, and that’s when Hell breaks loose.

I have to say that I was blown away by what Gearbox has done with the Xenomorphs themselves. Not only are they incredibly detailed, with a beautiful representation of their biomechanical aesthetic and a gorgeous sheen to their flesh, they are animated superbly. They scurry on the ceiling, squeeze through small gaps, and hop from left to right with feline grace in order to avoid gunfire. I adore the way the Xenos have been represented in Colonial Marines, and the brand new engine used to make the game come to life is doing a fine job so far.

However, regular Aliens just don’t cut it in Gearbox’s world. As the Marines are pushed outside, they encounter a brand new Xenomorph, the Charger. This is a hulking brute the size of a truck, with a hard, wide head that resembles the crest of a triceratops. As a purist fanboy, I’m wondering how they’re going to explain this new and weird Xeno. As a lover of extreme violence, however, I can’t help but laugh as the Charger rams a squadmate into a wall and repeatedly slams its head into him until he’s a crushed tube of toothpaste.

The Marines make it into a bunker, closing the doors just before the Charger squashes everyone. A larger group of soldiers are in the bunker, preparing to make their last stand. The player picks up a classic pulse rifle and a gun turret, which he places in a small side corridor that the Xenos are about to attack through. At this point, a second human player is thrown into the game to introduce us to the co-op.

Yet another classic scene occurs as the Aliens run headlong into the turret and are chewed to pieces. The player and a squadmate is also holding the Aliens off with suppressing fire. However, they start to come through the side vents, and overwhelm the position. The player has to turn back as, once again, the Xenomorphs take over. Then they cut the power.

“What do you mean they cut the power?”, chimes in Randy. “They’re God damn animals, man!” 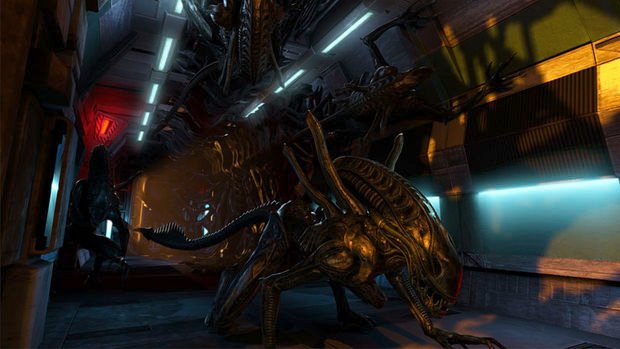 The ensuing slaughter is astounding to watch. As you run through what quickly becomes a rendering plant, Marines around you are locked in their own unique struggles. One is trying to fight a Xenomorph hand-to-hand as the creature attempts to pin him down. Another is lifted in the air by one hand before the Xeno eviscerates him. The whole thing feels like a Ghost Train full of setpieces that one can only catch glimpses of.

At the demo’s final hurrah, the Marines are in a storage bunker where the objective is to protect a Power Loader. The Loader is burning Xenos away with a flamethrower but the monsters are able to scale the walls and jump on top of it, again with some lovely animations. Your job is to shoot off the Xenomorphs as they attack the Loader. It is incredibly hectic, and you never quite feel that you’re getting the upper hand, which is exactly how it should be.

Oh … and then there’s an Alien Queen.

A freakin’ FANTASTIC Alien Queen. It moves, hisses, and rips a man in two just how one would expect it to. It looks freakin’ brilliant. Or it does before it stomps right over to the player, picks him up, and jams its biting tongue into his face.

That’s when I came all over the place.

The demo did a wonderful job of showing a game that pays maximum respect to the Aliens franchise and is set to deliver one of the most authentic experiences you’ll ever witness. I am more excited than ever for Colonial Marines and I have high hopes that this’ll be the Aliens game we’ve been gagging for.

Oh, and the Wii U version WILL include a motion tracker on the controller screen. Outstanding, all we need now’s a deck of cards.