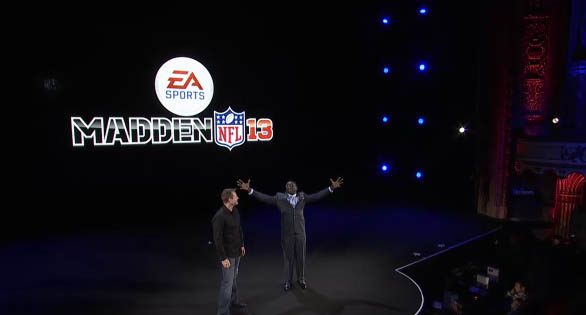 Legendary Ravens linebacker Ray Lewis opened the Madden NFL 13 presentation at EA’s E3 2012 press conference with a pretty intense speech on what it means to compete, and the brevity of actually playing in the NFL. Madden developer Cam Weber segued this discussion into some details on the new Infinity Engine, with “physics you can feel.” According to Weber, “no two plays will look or feel the same.” Different players will have to use different strategies due to the physics engine — as someone who favors the Ravens’ Ray Rice, I’m pretty excited about this change.

Michael Irvin also came on stage to talk about what it’s like to be a legendary football player, which led into the discussion of the “Legacy” system and the Connected Careers mode. It basically looks like an expanded Superstar system that Madden has traditionally added over the years, but a bit more in-depth. Also, Twitter will be integrated with Madden 13, and you can manage your team on your tablet, PC, or smartphone. SPORTS!