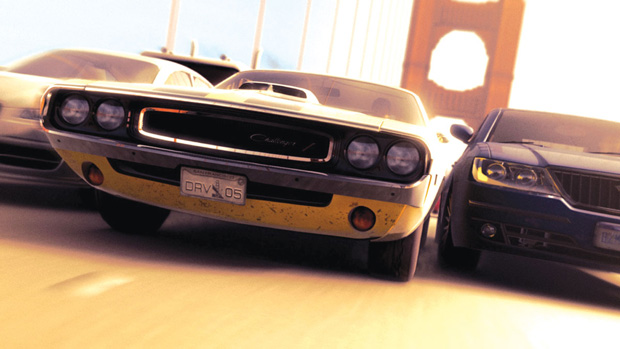 Ubisoft’s Driver: San Francisco was pushed back by a whole year, but it looks as though we are in the clear — the game should most definitely arrive on August 30.

Nick Chester offered a pretty robust preview of the game during the last E3, so I won’t go into much detail here. I will say that I’ve never played a Driver game before. I know nothing of the story, nor do I care much about learning it. I’m not even all that crazy about driving games in general.

As you might already know, the game features a “Shift” ability that allows you to jump in and out of any car at will. Just stop and think about how awesome that is. You can literally be driving around, causing a ruckus, and go, “This is balls! I want that sweet hotness that just drove by ten seconds ago!” In the next moment, BOOM! You are in that other car!

I was goofing off in freeplay mode, where I could zoom up to the friggin’ stratosphere, then zoom back down to any location in the city and commandeer any ride that caught my fancy. And because there are over 130 licensed vehicles to drive ranging from high-class rides to death traps, you’ll get a different experience every time. It’s pretty much the coolest thing ever.

Next, I tried multiplayer tag. Here, one vehicle is carrying the tag and it’s your job to slam into that vehicle and hold onto the tag for as long as possible. You earn a point for every second the tag is in your possession, and you win once you hit 100 points.

The kicker is that while shifting still works in this mode, the tag only sticks to the vehicle you were driving at the time, so you shouldn’t jump out while you are “it.” Everyone else will still be shifting up the place, and the whole affair makes you feel like an agent in the Matrix! You may think snatching the tag would be as simple as possessing the nearest car, but those cars tend to be going the speed limit, forcing you to waste time accelerating. It’s a much better strategy to find a car a ways ahead of the “it” car, going in the opposite direction, and jump into that.

I lost both rounds I played, but I lost gloriously! This game feels more like the Matrix than the goddamn Matrix games! I’m anxious to get back in the driver’s seat and start dicking around with the laws of time and space once again!