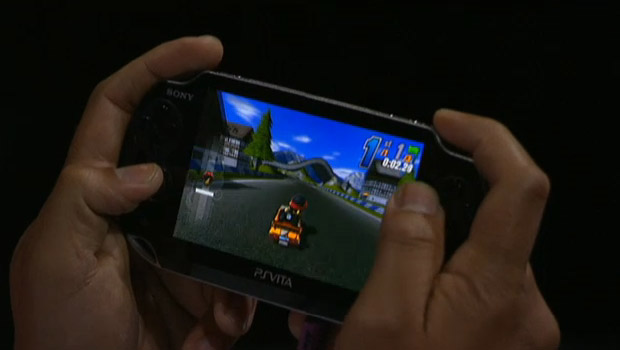 With ModNation Racers on the PlayStation 3, Sony introduced an easy way to create, play, and share tracks, karts, and customized racers. With its upcoming NGP version of the title, Sony’s San Diego Studio hopes to make it even easier using the portable’s front and rear touch screen features.

Creating a track on the original ModNation was pretty straight forward — you simply “drove” the track in real time, the game doing most of the work to bring it to life. With the NGP, players can now use the system’s touch screen to simply drag a finger across an overhead view of an environment, easily drawing a track.

Once drawn, players can let the game auto-populate the environment with ramps, hazards, and various touches, or delve deeper using most (if not all) of the same tools found in the console version. But for those looking to delve deeper, you’ll be able to use the touch screen to manipulate splines, banks, and more.

While creating tracks on the console was dummy proof, using the touch screen seemed even easier. I did run into a few issues, much of it likely related to the early developer NGP hardware I was using — the touch screen  simply wasn’t as responsive as I wanted it to be. In more than once instance, I touch or tried to drag a piece of the track and it simply didn’t respond as quickly as I wanted it to, if at all. I’m crossing my fingers (and I’m hopeful) that this will be smoothed out before release, because they’re definitely onto something with this track creation method.

The game will, of course, feature support for kart and track creation. While the game is being build from the ground up, it looks nearly identical to the console version from top to bottom. Many of the same menus were present, and the improved analog sticks made it feel better in my hands than the PlayStation Portable version of the kart racer.

Most exciting for current ModNation players is the announcement that the custom tracks currently available on the PS3 version of the game (Sony says its over two million) will be available for the NGP version day one. Unfortunately, it doesn’t sound like tracks created on the NGP will be transferable and playable to the console version, although that could change before the game’s release.