Double Fine founder Tim Schafer sees quite a few similarities between Children’s Television Workshop, the folks responsible for Sesame Street, and his own studio.

At Double Fine, says Schafer, the goal is always to try something new, to reach a new audience, and to push the boundaries of the medium of games. Forty years ago, CTW did the same thing when it launched Sesame Street, changing the landscape of children’s television and education for ever. That’s why the upcoming Sesame Street: Once Upon a Monster makes more sense than you might think for a studio whose last retail title was Brütal Legend, a mature title influenced by the world of heavy metal.

I had a chance to see a new chapter of the game’s living story book, “The Garden of Weedin’,” recently. As a parent of a toddler who’s been watching Sesame Street religiously as of late, I’m more excited for this colorful Kinect-exclusive than a grown man has any right to be. 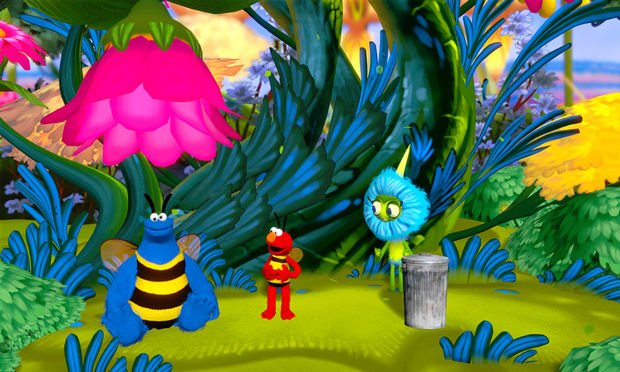 We’ve previewed Sesame Street: Once Upon a Monster before, so I’ll just give you the high-level overview of what it’s all about. It’s a story book brought to life, where two players enter a magical world of good-natured monsters, each of which is struck with a little problem. Using Kinect, players engage in a series of what are essentially mini-games as they assist the friendly creatures with their plight.

In “Garden of Weedin,” we meet a brand new monster named Shelby. The normally cheerful Shelby loves gardening, growing, and all things nature, but now she’s sad: her garden is ruined. It’s being overrun by weeds, and her beautiful, once colorful garden is now trashed. Wait, did someone say “trash”? Enter Sesame Street’s own connoisseur of junk Oscar the Grouch.

“What a beautiful disaster,” says Oscar, “yucky muddy mud everywhere! And look at all that trash. This is the worst garden I’ve ever seen… I love it!”

Cookie Monster and Elmo, who the players will be playing as, have an idea: help clean the garden, and let Oscar keep all the trash. “It win-win situation,” growls Cookie Monster, as Shelby claps cheerfully. 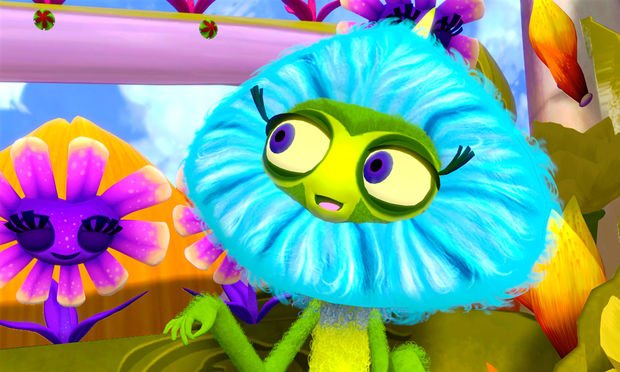 The story was broken up into a few mini-games, the first of which involved tossing pieces of trash into cans. It starts off relatively easy, easing players into the basics of the movements. Later, the trash becomes color coded, and you’ll have to match the garbage balls with the like-colored receptacle. Later in the chapter, players flapped their arms to make Cookie Monster and Elmo (who were wearing bee suits, of course) fly up the tallest plan in the garden. The final section involved “tuning” flowers to sing along with “Twinkle, Twinkle Little Start” by standing up or squatting down to move the pitch higher or lower.

In all cases, the games were simple and fun on a basic level, which is exactly what you’d expect from a game designed for parents to play with kids between the ages of four- and six-years old. To keep things interesting for players of all ages, Double Fine has implemented an adaptive difficult system into the title. If the game notes you’re doing particularly well, it might make the games for that player more challenging. The Kinect sensor is even being used to determine approximate age based on height, modifying gameplay behind-the-scenes to match. 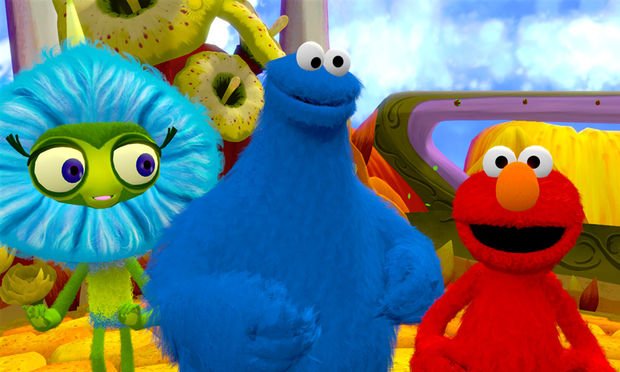 But while I was never challenged or particularly blown away by the in-game activities, Once Upon a Monster truly makes up for it in all of the other ways that count. It’s adorable beyond words, with such colorful designs, amusing monster dialogue, and activities that I couldn’t help but smile while playing. As it turns out, that feeling of elation was key in the game’s development.

“The original codename for Once Upon a Monster was ‘Happy Song’,” explained project lead Nathan Marz. “This is a game that I just wanted when you looked at it and play it it, I wanted you to feel as happy as when you hear your favorite song on the radio.

“This is about an intentionally uplifting and positive experience for families, not another game about guys who say ‘Delta!’ and shoot people in the face,” he says.

I look forward to singing this happy song with my little daughter this fall, when Sesame Street: Once Upon a Monster hits shelves.