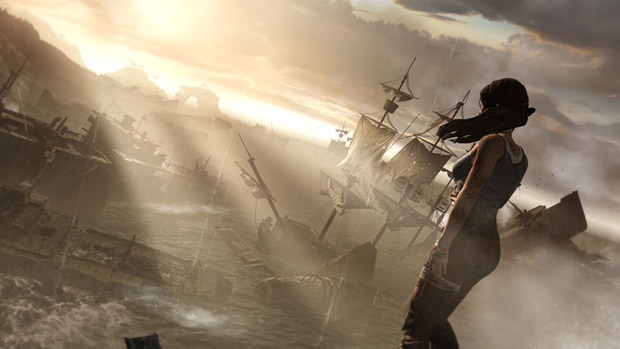 Yes, the Tomb Raider franchise is receiving yet another reboot. I think the general reaction when everyone first learned about another revamp was a giant eye-roll. Again, really? Especially considering that the series was getting good again? Come on! After seeing Tomb Raider in action, though, I believe the new game will cause eyes to pop out of heads with excitement.

The new game follows Lara Croft on her first adventure and this is grittier and bloodier than anything we’ve ever seen in a Tomb Raider game. The inexperienced 21-year-old Lara is fighting for her life on an island set on seeing her dead.

Lara is traveling on the ship named Endurance on the way to her first big adventure. Nature, however, has other plans for the British bombshell, and a ravenous storm tears the Endurance apart. By pure luck, Lara manages to survive and washes up on an island near the coast of Japan.

Surviving the storm used up all of Lara’s luck, it seems — the heroine regains consciousness hanging upside down in a sea cave. Someone got to Lara before she could wake up and has strung her up with evil, disturbing intentions as evidenced by all of the corpses hanging alongside her.

This is where the player takes control and the only thing you can do is swing Lara with the analog stick. Lara’s restraints are simple cloth and can easily be burned off if Lara can just get herself to touch one of the torches near her.

With enough momentum, Lara is able to do the unthinkable and use the fire to burn the cloth, allowing her to break free. Not only did she just burn herself, but getting free means she’s about to have a hard landing on the rocks below. That would have been painful enough, but unfortunately Lara manages to fall right onto a piece of rebar that pierces her side.

Lara has to pull the rebar out and doing so requires the player to tap the X button. The entire process is just cringe worthy as Lara is shrieking in pain and her facial expressions nail the horror she’s going through. Crystal Dynamics did a superb job on Lara’s body language based on what’s happening around her. And while I’m not a fan of the voice actress, she does a good job nailing Lara’s pain too.

With the rebar pulled out, Lara starts looking for a way out while clutching at her side. Lara finds a torch which helps her see in the darkness and uses it to solve some minor obstacles by burning more cloth to clear a path.

Soon Lara has to crawl through a small hole and just as she sticks her head in, a shadowy figure appears from behind and grabs Lara’s legs. A quick-time sequence begins and the player has to get out of the hold. Fail to do so and the attacker slams a rock climbing pick right through Lara’s chest and kills her. I was shocked by how brutal the act really was. The game restarts you pretty much at the same spot and this time Lara breaks free of the man’s hold and makes it through the hole just as a rock slide seals the path off.

The next area sees Lara in a large room where the ocean tide is quickly filling the cavern up. There’s no way out so you’ll have to make one by blowing up a wall. You’ll need to solve the puzzle in the area in order to do so, which consists of getting a few explosive barrels into a cage, setting them on fire and launching the barrels against the wall to escape.

Sounds simple enough, but water is flowing from all around that will extinguish your torch. And if you do get stuck in any puzzle, you can utilize Lara’s “Survival Instinct” ability which highlights objects and areas in the world of special interest to help put the clues together.

Once the explosion in the cave goes off, Lara makes a mad dash towards the light at the end of the tunnel, literally. As Lara ascends the cave, the player has to avoid some falling rocks through more QTE sequences and the mysterious man from before gets to Lara again. It’s another struggle between the two, but this is the last time you’ll be dealing with him as he gets crushed by some falling rocks. You actually get a nice clear view of his death as a rock crushes his skull in.

Lara makes it outside and is happy to see the sky and ocean. The happiness doesn’t last long; she has no idea where she is. Even worse, all around the coastline, Lara sees wrecked ships and planes from different eras such as a pirate ship. This is no ordinary place as we later learn Lara is in the Dragon’s Triangle, a cousin to the Bermuda Triangle.

The next section takes place about four days later and starts up just as Lara finds a man named Roth. Roth is a mentor figure to Lara and was also on the Endurance. This isn’t a happy reunion, though — Roth gets attacked by a few wolves. Roth manages to shoot down all of the wolves but only after getting hurt pretty badly.

Lara helps him to the ground and learns that one of the wolves managed to run off with Roth’s pack to a nearby cave that contained a radio transmitter and a first aid kit. Roth passes out due to his injuries leaving Lara to retrieve the pack.

This section takes place outdoors at night during a major rain storm. Off in the distance we can see a large mountain, a radio tower and other natural landmarks. As Crystal Dynamics stated, everything we were seeing is completely explorable. There will be multiple ways players will be able to solves puzzles or explore the environment and this is the biggest space Crystal Dynamics has ever created for a Tomb Raider game.

The cave is not too far from where you found Roth, the only challenge is climbing up the cliffside to get to it. Lara Croft is still the acrobatic superstar you expect her to be so getting to the cave is no challenge for her. She makes use of the buildings in an abandoned village nearby to get some leverage and scales the cliffside to get to the cave.

Once in, Lara slowly makes her way to the beeping sound being produced by the transmitter as a wolf is running around in the cave somewhere. It didn’t become obvious until this segment, but Lara is constantly talking to herself. At first I presumed she was doing this to calm herself down as she described out loud what was going on or had to do in the first tomb. Hearing her talk in the cave though made me realize she’s going to be doing this pretty much throughout the game. It’s an okay storytelling device, but I feel like Crystal Dynamics is relying too much on it.

Anyway, once Lara grabs Roth’s pack, she makes her way back out, but the wolf finally appears and pins Lara to the ground. Fail this QTE and the wolf rips out Lara’s neck. Succeed, and you’ll see Lara stab the wolf over a dozen times to death.

Once the wolf is dead, Lara apologizes to the creature. This is Lara’s first adventure and she’s not yet used to the idea of killing another creature or able to cope with violence. You’ll find that as you go through the game, Lara grows stronger and gains confidence, so these types of events won’t impact her so heavily.

Back at the camp, Roth regains consciousness and the two catch up. The adventure is far from over. The duo need to escape the island. The only obvious way to do so is to head up to the radio tower you see off in the distance and call for help with the transmitter. Roth can’t due to his injuries and Lara is scared to do the task alone. Roth motivates Lara and convinces her that she can. It’s a touching scene and you can see that the two have a real close relationship, like a father and daughter.

This is where the gameplay portion of the demo ends but Crystal Dynamics continued by showing us some of the other features we’ll be messing with in the game. Players will be able to upgrade Lara’s skills, equipment and combat. How exactly wasn’t detailed. Equipment will be very important and will be key in navigating the environment. Just because you can see the mountain in the distance like I described earlier doesn’t mean you can climb it right away. You have to have the right gear and equipment first.

Equipment will also tie into the Fast Travel System, which allows you to quickly go back to other parts of the island you’ve already explored. You’ll find that there are areas you can’t explore, not until you’ve gained the new ability or the right piece of equipment later on in the quest.

I went in hesitant at first, but now I cannot wait for the new Tomb Raider. I grew up during the Tomb Raider craze of the ’90s and seeing Lara brought back in such a shocking way is a breath of fresh air. This new vision is stunning and I believe fans of the series will love the grittier take.

Most of all, I love that Crystal Dynamics is focused on what really makes Lara, Lara. It’s not just some hot girl with a gigantic pair of tits wearing skimpy clothing. You are really going to feel for Lara as she’s put through hell and more while she tries to survive the world. This adventure is the making and defining of Lara Croft as a character.