Visceral Games could have just gave us another sequel and I would have been over the moon. Really, anything would have been fine with me. I would have been pleased with just more Necromorphs and plasma cutters, but they’ve decided to go all-out for Dead Space 3, packing in more story, more exploration, freedom and, for the first time, two-player cooperative action.

I feel like the survival horror gods are smiling down from videogame heaven upon us. Amen.

Our hero is still shit up a creek, but this time it’s more like the Nile river than a creek. Isaac crashes onto a new planet that is much bigger than anything we’ve seen in the series before, and on it he has to contend with harsh environments and new dangers. Visceral says that the fear of the unknown is part of the experience this time around, but that exploration could pay off as this planet is where Isaac may be able to put an end to the Necromorphs forever.

Freedom is a new focus for this third outing, so expect dungeons, hubs and new places to scavenge for resources. In turning the action up another notch, Visceral promises more big boss fights, and even crazier encounters than ever before. And in a first for the series, Isaac will be fighting human enemies in Dead Space 3, forcing him to adapt to ranged combat as well as close-range monster mushing.

While our mentally busted engineer has his work cut out for him, he’s not alone this time. Dead Space 3 supports drop-in/drop-out cooperative play, with the second player taking over new character Carver. This guy is a hardened soldier, and unlike Isaac, is untroubled by the morality of what’s going on around him. This difference in mindset will make for some interesting interplay between the two. 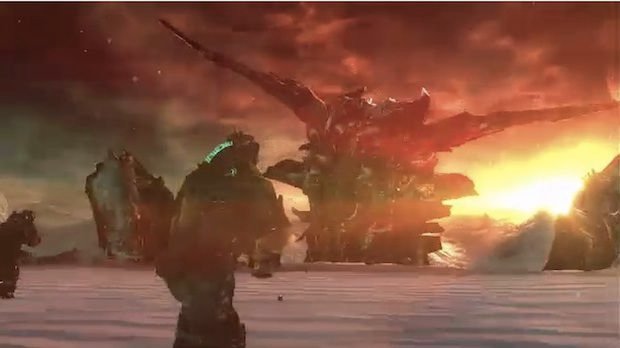 Our hands-on session with Dead Space 3 put us at the beginning of the game’s second act. Isaac comes out of a crashed plane into harsh snow and wind, working his way through fiery wreckage while calling for Ellie. While pushing through the snow trying to find out where he ended up, he begins to pick up supplies in the wreckage. Necromorphs jump up out of nowhere to interrupt his gathering, but he makes quick work of them and heads into what looks to be a mining cave. Making his way through this cave involves sending some plasma beams into more Necromorphs. Luckily, that never gets old.

Out of the other ends of the cave Isaac finds himself in a bind after a crane falls, pushing him almost off an edge. He hangs on by one arm and has to pull off some pretty acrobatic wreck hopping (think Uncharted) to make it back to safety. It seems that these days the chance of a vehicle teetering over a cliff in a videogame is pretty high. You’re better off walking.

After cleaning out some more snow-camouflaged ‘morphs, Isaac makes his way to a base where he calls out for Carver, who seems to be on the top side of the base wall. While trying to make his way up an elevator to enter the base, a huge crab-like monster crawls over the base wall. This boss battle doesn’t last long; the beast picked up Isaac with a claw and began munching on his head.

We had a chance to go at this boss battle again, but this time with some co-op help. What’s interesting is how the game’s events change with Carver in the mix. Visceral says that the story actually changes and new areas are opened up to explore when playing co-op. In addition, you’ll come across new challenges that force you to use cooperative strategies and different gameplay techniques, making a co-op play through a different game from single-player.

From the checkpoint, with Carver in play, we got to see some of the differences. Carver isn’t up on the base wall, but is down in front of it with Isaac. At the elevator checkpoint, a cutscene has Isaac being warned by Carver, with him saying that Isaac’s obsession with Ellie is not going to get in his way. 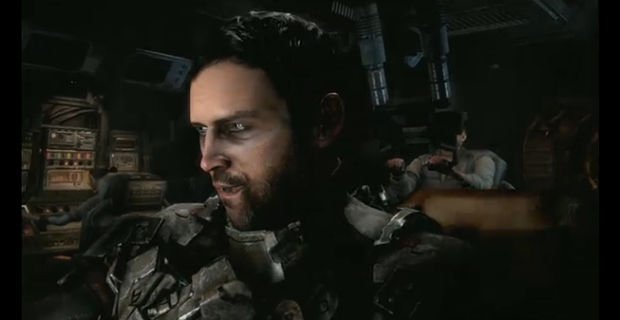 Later, when the boss comes over the wall, there’s more new dialogue. Carver yells to Isaac: “Oh shit! What the fuck is that?!” And in battle, Carver calls out battle tips, in this case letting Isaac know that the enemy’s armor is too thick, and that he should aim for its soft tissue. A team strategy of using Stasis to hold it while another shot off its weak pods finally took it down.

Finally in the base, working through some kind of encampment, human enemies make their first appearance. They provided a completely different kind of challenge as they worked together, calling out commands to each other (“Shoot him!”) or controlling zones with grenades. As the two progress, we saw a mix of both human and Necromorph attacks, and with some of the newly dead humans being reanimated by Necromorphs, things got pretty hectic. We soon noticed that we could stand down to let the humans and Necromorphs play off each other, letting them take each other out.

The final battle of this demo, which I did not get to see to completion, featured a huge drill that we tried to free from an obstruction. It came loose in a circular arena and began to move around erratically, putting us in danger. And to add some pressure, infected humans also made their way into this area, forcing us to fight off both the drill and wandering enemies at the same time.

For those worried that having to playing through a Dead Space with a buddy might detract from the experience, know that Visceral promises that the horror you expect is intact. Single-player is fine, and the experience is still along the lines of what you felt in the first two games. Co-op is an option on top of that, they say, so you shouldn’t worry.

Honestly, they had me at sequel. I was in from the get-go, excited to play the follow up to one of the best games I played last year. What I saw of Dead Space 3 was but a taste of what’s coming, so it’s hard to make a call now, but I can say that I’m already excited about being able to explore this planet along with a friend.